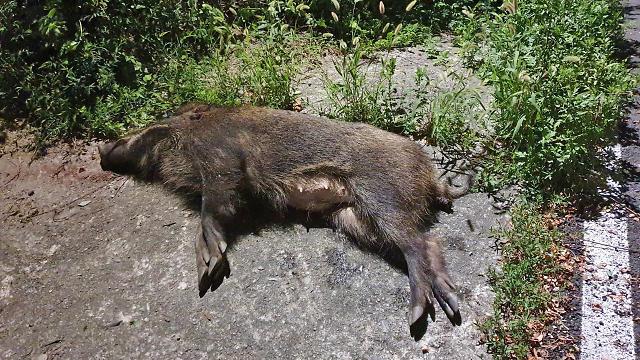 
SEOUL -- A 107-day-long winter hunting period will open in mid-December in South Korean cities and counties near the border with North Korea to catch wild boars that have been mercilessly killed for carrying the highly contagious African swine fever virus. Some 4,000 hunters carrying one shotgun and two hunting dogs each will be mobilized.

The hunting period, which starts on December 14, was declared at a meeting chaired by Governor Choi Moon-soon of Gangwon, a mountainous, forested province in northeast South Korea.

Hunting grounds covering some 5,950 square kilometers were designated by five cities and counties: Gangneung, Hongcheon, Hoengseong, Pyeongchang and Yangyang. The number of wild boars in the designated grounds was estimated at 17,000. Wild boar capture is unlimited and hunters can capture up to 10,000 water deers blamed for damaging crops.

To reduce the wild boar population. South Korea has mobilized government workers, hunters and soldiers especially in remote front-line areas near the demilitarized zone (DMZ), a four-kilometer-wide strip of land that has divided the peninsula since an armistice accord ended the three-year conflict in 1953. However, ASF cases have been reported sporadically.

The DMZ has been heavily fortified with minefields, concrete walls and iron fences. The restricted zone provides a unique environment that wildlife can inhabit without the influence of various development projects and other human activities. However, boars became a nuisance after South Korea reported the outbreak of ASF on September 17, 2019.

China, which is the world’s biggest pork producer, became the first Asian country to be hit by ASF in August 2018. The epidemic has spread to other Asian countries. ASF is not harmful to people, but it is highly fatal for pigs.