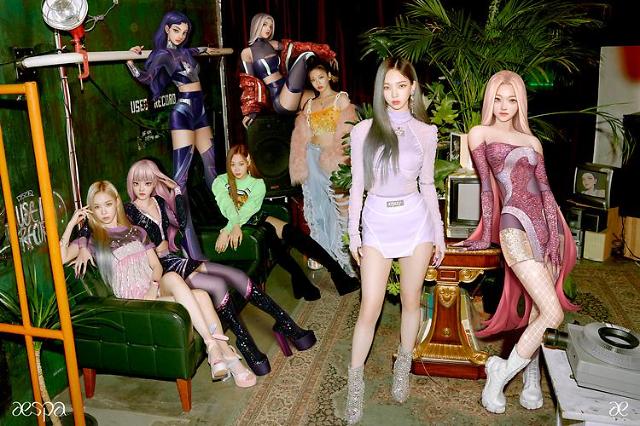 
SEOUL -- Aespa, a new four-member girl band formed by South Korea's SM Entertainment, launched a fan club called "My" to mark their debut on November 17 with "Black Mamba," a powerful dance song based on synthesizer sound and intense bass,

"It's a burden, but I want to show you a good song and a good stage as soon as possible," Karina, a 20-year vocalist and rapper, said before the release of the group's debut song. The group has two South Korean members, Karina, Winter, and two foreign members -- Giselle, a rapper from Japan, and Ningning, a Chinese vocalist from China.

SM founder Lee Soo-man said in an online speech at a forum in Seoul on October 28 that the girl band would demonstrate "a completely new and innovative concept that transcends the boundaries of real and virtual worlds."

Real-life members and avatars communicate through a connection signal called "Sync" with the help of an artificial intelligence system. Avatar characters will be involved in independent activities, such as producing their own online content, allowing real-world members to meet fans in more diverse ways.

SM said the girl band would appear on a TV music program on November 20. "It's so amazing. I want to work harder because so many people show their interest," said Giselle.

aespa is a combination of "æ," which expresses "Avatar X Experience," and "aspect," which means double-sided. SM said the group would showcase innovative and diverse activities based on the view of meeting another self and experiencing a new world.