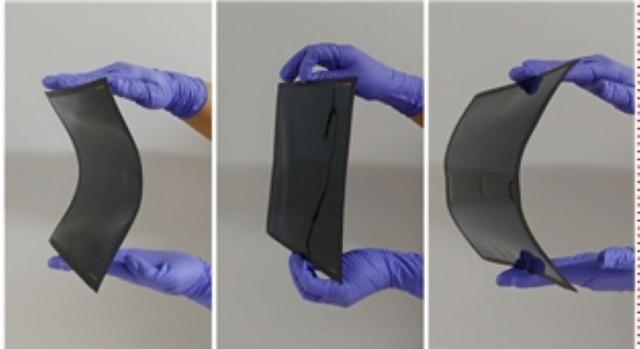 
SEOUL -- South Korea's state-run research body has demonstrated the pilot-scale "roll-to-roll" manufacturing of flexible and light perovskite solar cells that can be used in cars, portable electronic devices, wearable devices and more in the future.

Scalable fabrication has been a big challenge for the commercialization of PSCs. A research team led by Seo Jang-won at the Korea Research Institute of Chemical Technology (KRICT) has developed a roll-to-roll (R2R) process that enables the low-cost mass production of flexible and light perovskite solar cells. R2R processing is used to create electronic devices on a roll of flexible plastic or metal foil.

As an eco-friendly antisolvent, Seo's team introduced tert-butyl alcohol (tBuOH), a colorless solid, which melts near room temperature and has a camphor-like odor, for R2R processing through cooperation with VTT Technical Research Centre of Finland.

"We demonstrated R2R-processed flexible PSCs at pilot scale through gravure-printing, antisolvent bathing, and subsequent annealing process," Seo's team said in its research paper published on the website of Nature Communications, a peer-reviewed scientific journal. "We believe that this work will pave a new way for high throughput, low-cost production of flexible PSCs at larger scale via R2R processes in the near future."

Based on a well-bending polymer substrate, Seo's team has developed a perovskite solar cell with an efficiency of 20.7 percent, along with a technology that can increase efficiency even at low temperatures.