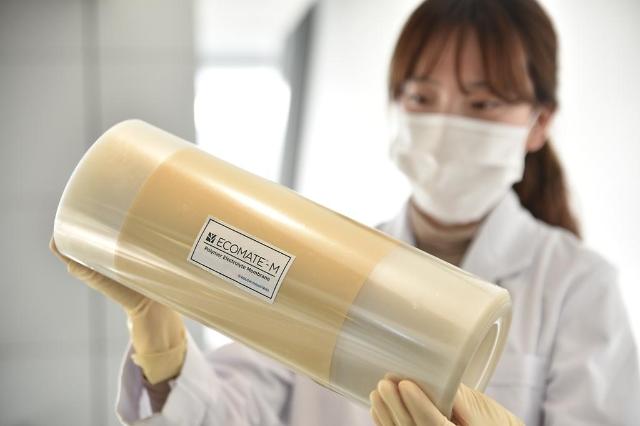 SEOUL -- Kolon Industries, a chemical and textile manufacturing company, is ready to join South Korea's national push for the early establishment of a hydrogen ecosystem by completing a plant for the mass-production of polymer electrolyte membranes, a key material for fuel cells.

A polymer electrolyte membrane (PEM) is involved with the conduction of protons from the anode to the cathode, acting as a separating barrier. Kolon Industries will complete a PEM line at Gumi in November for mass production in 2021. "We hope that this PEM mass-production facility will create synergy with existing business capabilities to grow our business faster," Kolon Industries' fuel cell business head Lee Moo-seok said in a statement on November 19.

"We will consolidate our leading position with superior technology," Lee said. PEMs can be used to produce redox flow batteries for energy storage systems and separators applied to water electrolysis technology for hydrogen production. Water electrolysis is the process of using electricity to decompose water into oxygen and hydrogen gas.

The PEM is sandwiched between two electrodes, which are electrically insulated from each other and make up the anode and cathode respectively. Kolon Industries has also acquired a production base for the membrane electrode assembly, which is an assembled stack of PEMs.

South Korea has unveiled a roadmap to secure its firm leadership in the global hydrogen market by producing 6.2 million fuel cell vehicles by 2040 and expand the use of fuel cells. The Hyosung Group has partnered with Linde, a Dublin-based engineering group, to build a liquid hydrogen plant.