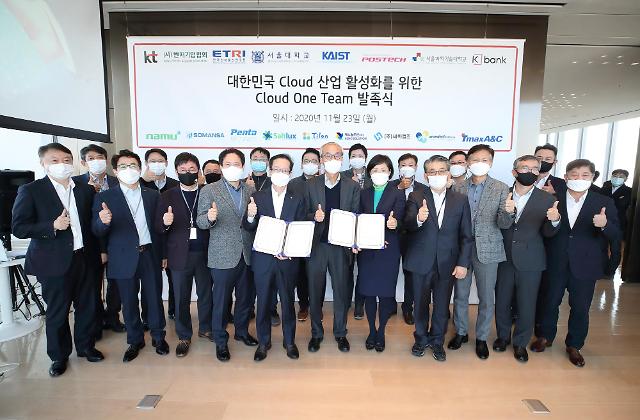 SEOUL -- KT, a top telecom company in South Korea, joined forces with private experts, state researchers and scholars to form a team for the development and expansion of an indigenous cloud ecosystem in the domestic could market dominated by foreign tech firms such as Amazon and Microsoft. KT has promised to provide cloud infrastructure-lending services for public companies or help companies set up their own cloud infrastructure.

KT said it would support organic cooperation among 16 members of Cloud One Team, which was formed on November 23 to strengthen the competitiveness of South Korea's cloud ecosystem. They would find a business model to distribute cloud services with technical skills, economic feasibility and stability while developing a system for the systematic education of talented people.

The team's secretariat will be set up at KT's head office in Seoul. The team would carry out research and core technology development. KT's convergence technology institute head Jun Hong-bum said that the team would be pivotal in developing South Korea's cloud industry. "KT will contribute to the expansion of the native cloud ecosystem by supporting Cloud One Team and lead the digital innovation of Korean industries."

For its digital autonomy, South Korea has raised the need to establish a state-led cloud infrastructure as the establishment of super-fast 5G telecom networks fuels the use of could platforms. South Korea's public cloud market is expected to reach 3.7 trillion won in 2022.

Microsoft and AWS (Amazon Web Services), a subsidiary of Amazon that provides on-demand cloud computing platforms, are top players in South Korea's cloud-based PaaS (platform as a service) and SaaS (software as a service) market. PaaS and SaaS are provided in various sectors including manufacturing, security, fintech and healthcare.