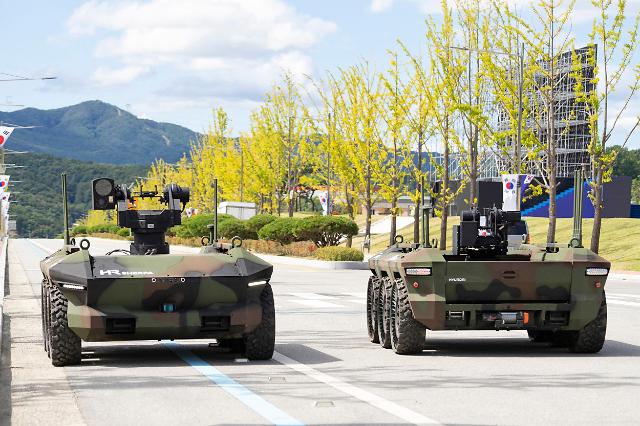 The Defense Acquisition Program Administration (DAPA), a state body controlled by the defense ministry, picked Hyundai Rotem's military unmanned ground vehicles (UGVs) for a rapid acquisition and demonstration project, which is aimed at introducing products applied with new technologies such as artificial intelligence quickly after a trial operation.

Hyundai Rotem's two-ton vehicle is equipped with a remote-controlled weapon station to enhance its ability to track or shoot targets from a long distance, based on HR-Sherpa, a six-wheeled UGV that features an electric drive system, a 360-degree rotation function, a skid steering system and airless tires for rough driving.

HR-Sherpa, which is 2.4 meters long, can run at a maximum speed of 30 kilometers (18 miles) per hour. A water-cooled battery system and an integrated heat management system enable long-distance driving and all-season weather operations. Along with firepower support, reconnaissance and the delivery of goods, it can implement remote-controlled functions. In November 2019, KT partnered with Hyundai Rotem to develop a control tower platform and a remote operation system for 5G-based UGVs.

Unmanned systems have high growth potential. Hyundai Rotem plans to develop additional unmanned vehicles for military and civilian use. Self-driving technology will be applied to unmanned tanks and armored vehicles, contributing to the enhancement of military combat capabilities.

Hyundai Rotem has competed with Hanwha Defense which has developed a four-wheeled UGV equipped with a K3 light machine-gun. Hanwha has described its UGV as a weapon system to improve the viability and combat capability of infantry units by supporting the transport of high-load combat materials, saying that drones and a control system can be used for UGVs to remotely conduct search and reconnaissance missions.

Hanwha's four-wheeled UGV is equipped with an electro-optical infrared system featuring a day-light and uncooled thermal camera. With a payload of 160 kilograms, the vehicle can run at a maximum speed of 20 km per hour and negotiate a maximum gradient climb of 60 percent and slide slope of 30 percent.