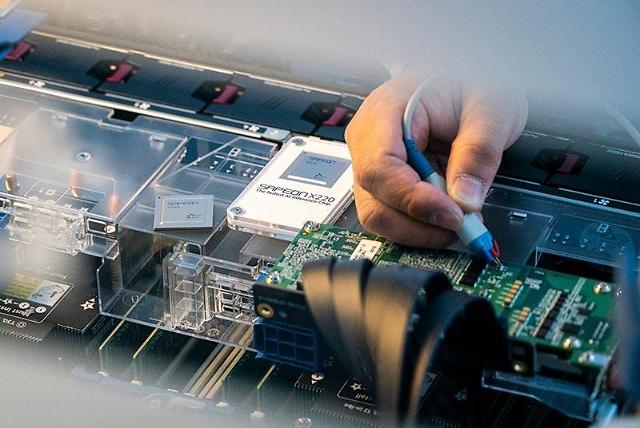 
SEOUL -- SK Telecom, a top South Korean mobile carrier which has aggressively adopted new technologies, made its foray into the artificial intelligence semiconductor market dominated by global tech firms by unveiling its own AI chip that was optimally designed to process AI tasks faster, use less power and efficiently process large amounts of data.

SK Telecom (SKT) said in a statement on Novemb er 25 that the chip named "SAPEON X220" would enable the provision of high-quality AI services by enhancing the performance of data centers through the speedy computation of massive amounts of data.

The chip's deep learning computation speed is 1.5 times faster than that of graphics processing units (GPUs) widely used by AI-service companies, SKT said, adding the chip can use 20 percent less power and is about half the price of GPUs. Due to high GPU prices and high power consumption, companies are burdened with operating costs.

"The launch of AI semiconductors for data centers for the first time in South Korea is a splendid feat accomplished through SKT's technical and service capabilities, active government support, and cooperation with small and medium-sized enterprises," SKT's chief technology officer Kim Yoon said. "We will grow into a top global AI company by combining AI semiconductors with technologies such as AI, 5G and cloud."

SKT said it would use SAPEON X220 to improve the voice recognition capability of its AI service NUGU. The media platform of a joint venture between SKT and Sinclair Broadcast Group, a major American broadcasting company, will use SAPEON X220 for its cloud server.

SKT aims to combine AI semiconductor chips and 5G edge cloud. The application of an AI chip to a cloud located close to the end-users will enable the provision of high-quality AI services with ultra-low latency regardless of customer devices. It would offer a complete solution package as a service by combining its AI chip and software.

SKT has led a state project to develop next-generation AI chips and interfaces that can be utilized for high-performance servers like cloud data centers. South Korea has unveiled the goal of becoming a global leader in AI-related semiconductors.

Samsung Electronics has been involved in the development of a next-generation neural processing unit (NPU) capable of handling AI learning and reasoning, saying it would evolve its NPU research into novel AI hardware technologies such as neuromorphic processors that aim to operate at the level of a human brain.