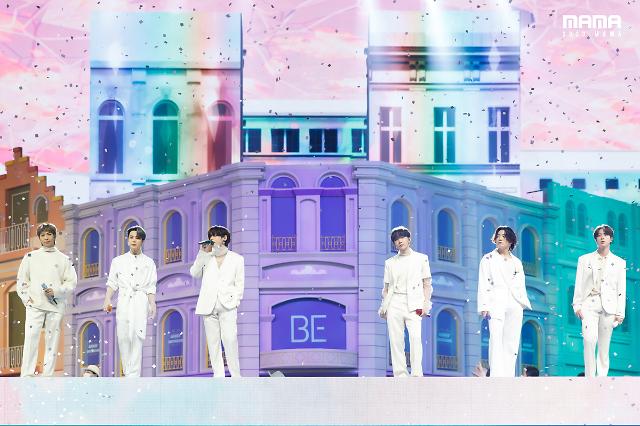 
SEOUL -- BTS members, who were at the forefront of globalizing K-pop, wowed fans at Asia's biggest year-end music show with a splendid virtual stage and new content based on cutting-edge technologies such as three-dimensional visual effects and extended reality.

At the annual music ceremony of Mnet Asian Music Awards (MAMA) on December 6, fans were pop-eyed with surprise when Suga, a BTS member who has been away after shoulder surgery, set up a full stage with teammates for "Life Goes On," the title track of the new album, that became the first Korean song to land at No. 1 on Billboard's main singles chart.

It was not real but Suga's vivid hologram version. MAMA has been held at venues across Asia. For this year's contactless event, Vive Studios, a visualization company, adopted extended reality (XR) encompassing a wide spectrum of hardware and software to generate new forms of reality by bringing digital objects into the physical world and bringing physical world objects into the digital world.

Vive Studios gained public recognition for its role in the production of a special TV documentary that depicted the tearful reunion of a sorrow-stricken mother and her daughter, who died of a rare incurable disease at the age of seven, in the virtual world. The MBC documentary titled "I Met You" aired on February 6.

Up-to-date technologies such as mixed reality (MR) have been used for online concerts by BTS and other K-pop bands to console fans who have been mentally fatigued by a COVID-19 pandemic. MR combines virtual reality elements with human vision.