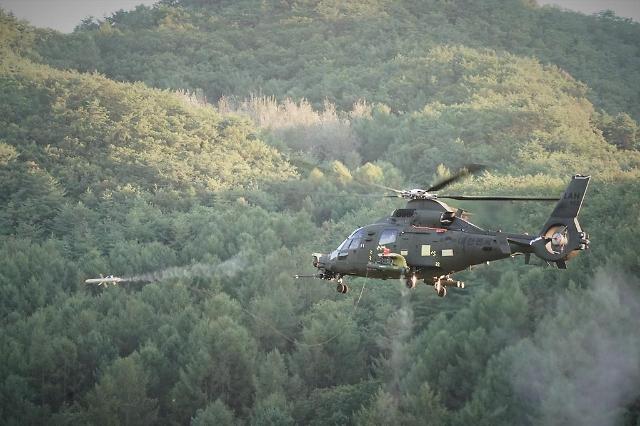 SEOUL -- South Korea's home-made light attack helicopter was found to be operationally suitable for combat in an interim decision by a state arms procurement agency controlled by the defense ministry, more than five years after development began, based on H-155, a twin-engine helicopter created by European aircraft maker Airbus.

South Korea's sole aircraft maker, Korea Aerospace Industries (KAI) was involved in the development of a home-made light attack helicopter (LAH). Development, which began in June 2015, would be completed in late 2022. KAI released an LAH prototype in 2018 for test and evaluation to assess its effectiveness and suitability for combat.

KAI said on December 11 that its LAH prototype was provisionally judged fit for battle by the Defense Acquisition Program Administration (DAPA). Subsequent tests and evaluations will be conducted to determine whether or not it is suitable for combat.

The LAH carrying a 20mm machine gun and four anti-tank missiles or 70mm rocket pods has a maximum takeoff weight of 4.9 tons. It is capable of flying at a maximum speed of 324 kilometers (201 miles) per hour. KAI plans to attach "Cheongeom," a home-made air-to-ground missile that would replace TOW anti-tank missiles. The precision missile is scheduled for production in 2023.

Development of the light civil helicopter (LCH), a variant of LAH, will be completed in 2021. It is capable of carrying up to 15 people. KAI has already developed Surion, a twin-engine transport utility helicopter, with technical help from Airbus Helicopters.