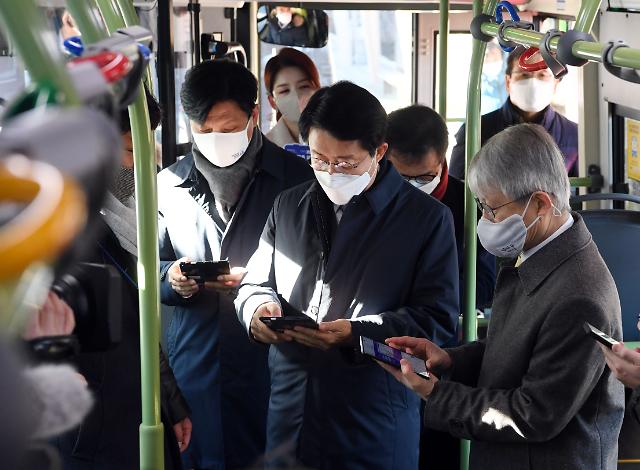 SEOUL -- South Korea has established a free nationwide wireless internet network on public buses for the first time in the world in a bid to provide citizens with easy access to information and reduce communication costs.

"The free WiFi network can ease the financial burden off citizens who find it hard to use expensive unlimited data plans," Science and ICT Minister Choi Ki-young said in a press briefing held at a city bus transit center in Yeouido, the country's center of finance and politics, on December 14. Some 35,600 buses across the country were equipped with Free WiFi access points.

The free WiFi network was established through a joint project that was launched in 2018 by the ministry and 16 local governments to provide free internet through public buses. The ministry speculated that economic benefits of up to 220 billion won ($21.4 million) will be generated annually during the next three years.

According to the science ministry, the free WiFi service on buses was used more than 420 million times since May last year. More than 16,000 terabytes of data which is equivalent to 14 million high-definition movie data files, was consumed during the period.

The free WiFi on buses is included in the government's big picture to narrow the information gap between the underprivileged people and other citizens. South Korea plans to establish a nationwide internet network by setting up some 41,000 free WiFi access points at public places including village offices and community centers as well as connecting some 1,300 remote villages located in hard-to-reach places such as in the mountains with high-speed internet lines by 2022.