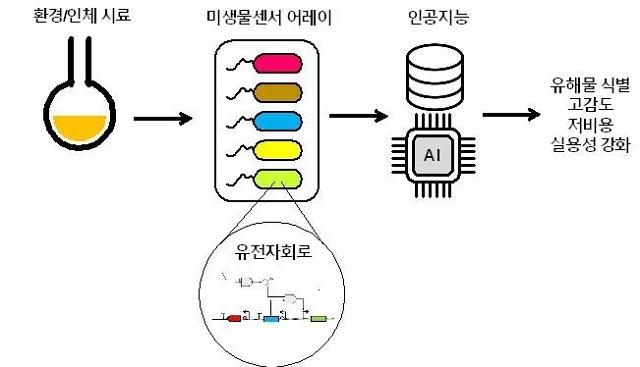 Microbial sensors use biologically integrated transducers that generate signals when they come in contact with target substances. Signals can be analyzed to identify extracellular chemicals and the environment. However, proteins that are used to create sensors sometimes malfunction, making them not so reliable. Many research facilities around the world are developing technologies to increase the accuracy of sensors.

The Korea Research Institute of Bioscience & Biotechnology (KRIBB) said in a statement on December 16 that the institute has developed an AI-based microbial biosensor system with an accuracy of up to 95.3 percent. Conventional biosensors have an average accuracy of 40 percent.

"The sensor system can be used to monitor harmful substances in environmental samples or inside a living body," a KIBB researcher was quoted as saying.

Researchers used AI to create many types of protein variants to see how they react toward various target substances. Big data was collected by studying different kinds of signals they transmit. The toxic substance-detecting system consists of bundles of biosensors that can detect up to 75 times more harmful substances than conventional ones.