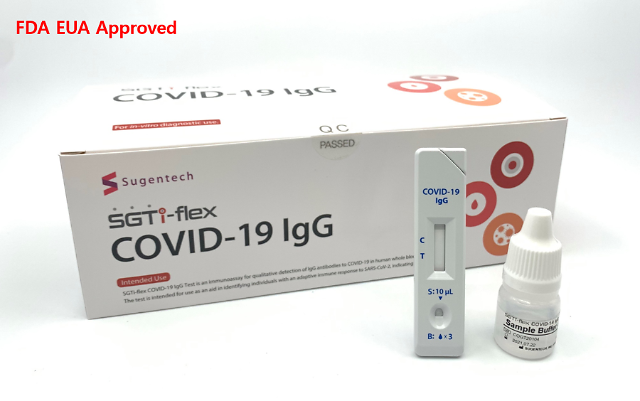 SEOUL -- The domestic use of a rapid antibody test device developed by Sugentech, an in-vitro diagnostic test reagent producer, has been approved in South Korea. The company highlighted the usefulness of its product to prevent the spread of COVID-19 at medical institutions and other vulnerable places.

Sugentech has commercialized a variety of diagnostic medical devices. Its test kit called SGTi-flex COVID-19 IgG, which detects the presence of antibodies, has won Emergency Use Authorization (EUA) from the U.S. Food and Drug Administration. EUA is a mechanism to facilitate the availability and use of medical countermeasures, including vaccines, during public health emergencies.

Sugentech said on December 21 that its antibody test kit has been officially approved by the Ministry of Food and Drug Safety. A rapid increase in COVID-19 patients highlighted the need for quick on-site inspection kits, an unnamed Sugentech official said.

South Korea has adopted a real-time polymerase chain reaction (RT-PCR) method that amplifies specific DNA samples. The method takes hours to get results but it has been used widely due to reliability. Rapid test kits have been approved only for urgent surgery, but health officials eased their tough stance to introduce a rapid inspection of vulnerable facilities such as nursing and mental hospitals.