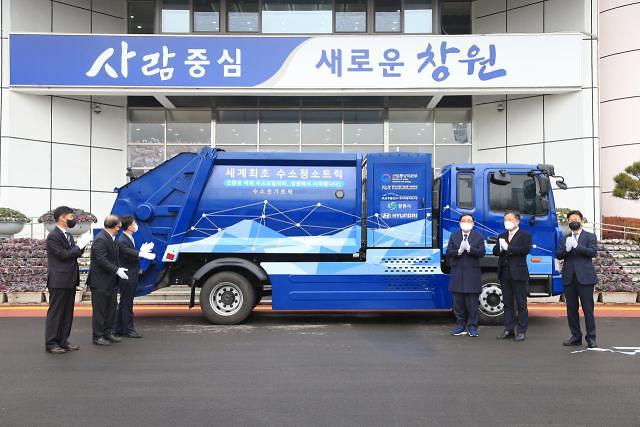 SEOUL -- The southern port city of Changwon has joined hand with Hyundai Motor and a state automotive research institute to demonstrate the world's first hydrogen fuel cell-powered garbage truck in a bid to accelerate the popularization of eco-friendly vehicles for administrative purposes and reduce the emission of pollution.

Changwon some 300 kilometers (186 miles) southeast of Seoul said in a statement on December 28 that the port city, Hyundai and the Korea Automotive Technology Institute (Katech) held a ceremony to begin a 12-month fuel cell truck test operation. The five-ton truck looks just like any other garbage truck but it is equipped with fuel cells and an electric powertrain instead of an internal combustion engine.

Through the joint project, the city will see if the garbage truck is fit for actual operation. Fuel cells, a hydrogen tank and a cooling system will be tested for safety. The truck is capable of driving up to 346 km with 25 kilograms (55 pounds) of hydrogen.