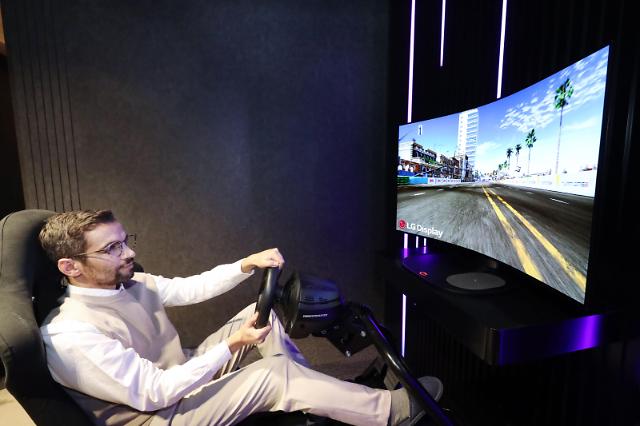 
SEOUL -- At the consumer electronics show (CES) in 2021, LG Display, a major flat panel maker in South Korea, will showcase the world's first 48-inch bendable organic light-emitting diode (OLED) display which is optimized for gaming and produces sound without any speakers

The display's paper-thin screen, which is bendable up to a radius of 1,000mm, can be turned into a flat screen while watching TV and used as a curved screen while gaming, LG Display said, adding the curved display offers a uniform viewing distance from the middle of the screen to its edge, maximizing the visual immersion that is popular among gamers.

"LG Display’s 48-inch Bendable CSO display is optimized for gaming as it maximizes the use of advanced technology that produces another level in terms of providing an immersive experience," LG Display's TV business unit head Oh Chang-ho said in a statement. "In other words, it offers the very best gaming environment to gamers.”

OLED technology has gained attention in the gaming TV market for its superiority, as each pixel emits its own light, offering an infinite contrast ratio and creating vivid picture quality. LG Display said the cinematic sound OLED (CSO) display can vibrate and make their own sound without the use of any speakers, offering a vivid sense of reality as if the on-screen characters were talking directly to the viewer.

The display’s ultra-slim film exciter, which is the part that vibrates the display, allows viewers to enjoy a thinner screen as well as highly impressive sound, said LG Display, which has commercialized rollable TVs that received positive feedback from critics. The company is now involved in a project to develop stretchable displays which are seen as the final phase of flexible display technologies.

Bendable, foldable and rollable panels have been developed, but the next generation product is stretchable to all sides without affecting the quality of displays. Competition is growing among TV makers to develop next-generation displays. Samsung has vowed to introduce a stretchable display suitable for use in the wearable industry and a vehicle infotainment system.