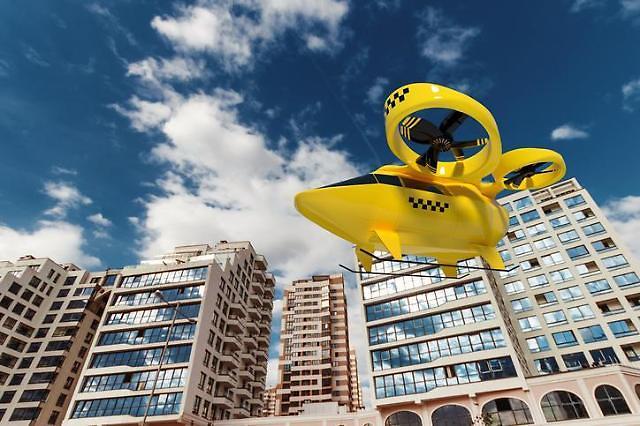 SEOUL -- A southern city in South Korea has embarked on a joint research project to develop and commercialize a heavy-duty drone that is capable of lifting some 200 kilograms (440 pounds). The drone can be used in many sectors such as urban aerial mobility, military, logistics, and monitoring.

The southern city said that the research and development of the cargo drone would play an important role in accelerating South Korea's drone technology and nurture the growth of the country's urban aerial mobility (UAM) sector that uses UAVs as flying taxis to carry passengers between UAM stations located atop of high-rise buildings.

Through the joint research project, participating companies, organizations, and governing bodies will establish infrastructure for the development, authentication, and demonstration of new technologies. Gwangju said the cargo drone will be powered by hydrogen fuel cells.

A government road map was unveiled on June 4, calling for the commercialization of drone taxis in 2025 and autonomous flights in 2035. Pilots will board flying vehicles for about 10 years after the first stage of commercialization. The government plans to prepare operating standards by 2024.

The Hyundai auto group has revealed plans to become a mobility service company. Executive vice chairman Chung Eui-sun, the group's virtual head, called for a drastic structural change to become a key player in the production of PAVs. Through collaboration with Uber, Hyundai unveiled its first electric air vehicle concept, S-A1, at a trade fair in Las Vegas.

Doosan Mobility Innovation, a drone solution provider, will develop fuel cell technology for light and heavy flying vehicles. HSC, a South Korean defense contractor, has launched a campaign to nurture air taxis as its next growth engine. Electric and hybrid-electric vertical takeoff and landing aircraft, or eVTOLs, are being developed in the quest for autonomous passenger air vehicles.