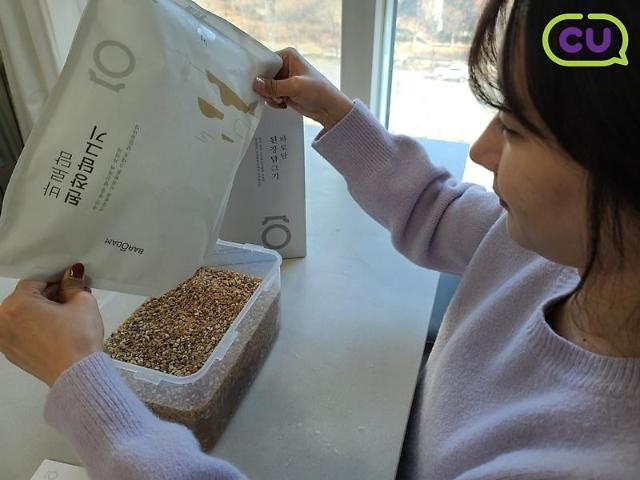 SEOUL -- A South Korean convenience store franchise has released a do-it-yourself kit of traditional fermented bean paste called "Doenjang" in Korean as a special treat for homebodies. Making Doenjang requires a slow and smelly process that normally needs a special garden. By using the kit, customers can easily make the bean paste at home.

Doenjang is made with bean powder, water and salt. The mixture of ingredients is made into blocks and submerged in saltwater inside a clay pot for fermentation. The water used for fermentation is filtered and boiled to make soy sauce, and Doenjang is kept separately. It has a similar texture to that of the Mexican black bean paste.

The production process of Deonjang takes at least three months. It is hard for city dwellers to make the bean paste at home as the block gives off a pungent, cheesy smell during fermentation. Along with soy sauce, Doenjang is one of Koreans' favorite ingredients that are used to make soup or sauce for meat.

BGF Retail, the operator of South Korea's convenience store franchise CU, said in a statement on January 18 that it has released a Doenjang do-it-yourself (DIY) kit as a limited edition. CU will receive pre-orders for 1,000 items for 30 days through its smartphone shopping app. The kit was priced at 39,000 won ($35.2) with no delivery fee.

The limited-edition kit will come with a pack of bean powder, salt and a safe container for fermentation. Customers can mix the ingredients with water and leave it at room temperature for 90 days to make the bean paste. CU said its bean powder contains no genetically modified organisms or additional additives.

DIY kits became popular among young South Korean consumers due to the COVID-19 pandemic that increased the number of people cooking at home. CU said that overall DIY kit sales were up 57.5 percent on-year in 2020. DIY kits for making traditional rice wine and various kinds of teas have gained popularity. "I love making things using DIY kits. I also enjoy the waiting time. It makes me wonder how my creations would taste," Jeong Goo-yeon, a 32-year-old businesswoman, told Aju News.