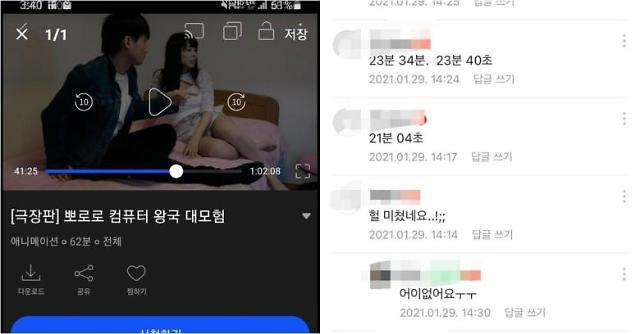 [This screenshot was captured from a South Korean online community]


SEOUL -- South Korea's integrated over-the-top video-on-demand service has apologized over sex video clips that were accidentally inserted into a film version of Pororo, a popular children's animation series. Parents were shocked, asking for a thorough explanation.

"Is this real? Sex video clips were played when my child was watching Pororo," a mother said in a post uploaded onto an online community on January 29. Similar posts were uploaded on other websites. Some posts included images that showed adult video clips when the over-the-top (OTT) platform played "Pororo, Cyberspace Adventure."

Pororo was created by Iconix, a South Korean animation maker. The animation series starring little penguin and his animal friends was created into films, toys, books, and other content.

"We bow deeply to apologize to those who experienced chaos and inconvenience," OTT service operator Wavve said in a statement. "It was clearly our fault. We will do our best to prevent similar cases."

The OTT service provider blamed a technical error that happened when it was recovering damaged files. "Because the error is very serious as it took place on children's content, it should never happen again," Wavve said.

Some users want Wavve to provide a thorough explanation. "I think Wavve should explain how 'sex video' ended up being inserted into a video clip when the company was replacing video files on a server," Safety Spirit, a user from South Korean IT community Clien, said in a post.