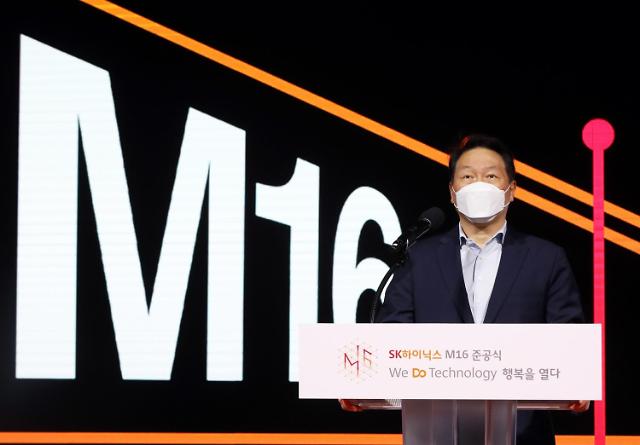 SK Group chairman Chey Tae-won speaks at a ceremony to open a new microchip plant in Icheon.[Courtesy of SK Hynix]

The plant called "M16" was built at Icheon about 40 kilometers (25 miles) southeast of Seoul with an injection of 3.5 trillion won ($3.13 billion). The new plant uses extreme ultraviolet (EUV) light wavelengths to expose an ultra-thin electrical circuit.

When construction began in 2018, there were concerns about oversupply. However, SK hynix has aggressively bolstered its global presence with new investments to expand production facilities. "The bold decision made at a difficult time has allowed us to dream of a bigger future," SK Group chairman Chey Tae-won said in an opening ceremony on February 1.

"M16 will remain an important symbol as a completion of our big plan that the company has drawn up and a starting point leading to the Yongin cluster in the future," said Chey, who has vowed to build the world's largest semiconductor cluster in Yongin. Some 120 trillion won will be spent after 2022 to build the Yongin cluster that will house four fabrication plants as well as about 50 equipment, parts and material makers.

In October 2020, SK hynix signed a $9 billion deal to acquire Intel's NAND memory and storage business. The deal is aimed at securing a relatively stable and balanced structure as the proportion of DRAM will decrease to 60 percent and NAND will increase to 40 percent.

For decades, the semiconductor industry has been highly cyclical. Demand was mainly driven by the personal computer market throughout the 1980s and 1990s and smartphones later on. Experts predict a different cycle, citing the broadened usage of highly efficient chips to meet the needs of a new industry.