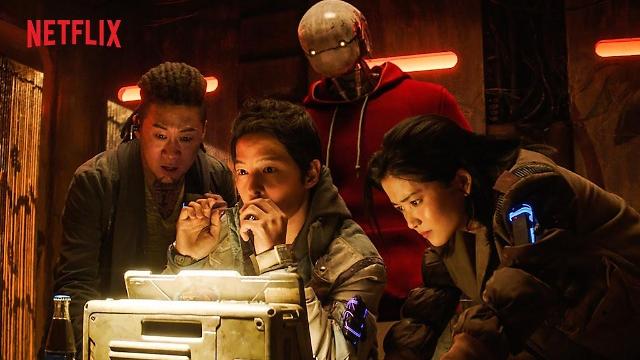 SEOUL -- "It seems to have shown well what it would be like to have a space movie in South Korea," said Kim Tae-ri, a 30-year-old actress who played the role of captain in "Space Sweepers," the first homemade space movie to be released worldwide through Netflix, the world's top over-the-top platform.

The movie directed by Jo Sung-hee will hit the OTT platform globally on February 5. It depicts a story about space debris salvagers aboard their spaceship, Victory, finding themselves in an unexpected perilous situation after encountering a humanoid robot known as a weapon of mass destruction, set in 2092.

"The movie is something very Korean," Kim, know for her main roles in "Handmaiden" and "Mister Sunshine," said at an online news conference on February 2. "I am proud that our movie was filmed together at the starting point. I look forward to the SF movies that will be released afterward."

Hollywood sci-fi movies such as the 2014 film "Interstellar" directed by Christopher Nolan and the 2013 film "Gravity" directed by Alfonso Cuarón were popular among South Korean moviegoers but homemade ones have been shunned for the lack of plot and flimsy special effects.

"The director must have felt a lot of pressure in that it was the first space film to represent our nation. I was more excited and have expectation than feeling pressured," said Song Joong-ki, an actor who is famous in Asia for his appearance in the 2016 TV series "Descendants of the Sun."

The fact that Space Sweepers will be released on Netflix, the main channel of providing access to Hallyu (Korean cultural wave) content, showed expectations rather than disappointment, Jo said. "No regrets but excitement and gratitude," he said, expressing his hope that foreign audiences would know about various films being made in South Korea.

There were many details to pay attention to, from technical problems of implementing space on the screen to capturing a robot's motion. "I happened to hear about space junk 10 years ago and started writing the scenario," the director said, adding he tried to depict a situation in which people clean up space waste, living with oil stains, despite tremendous technology development.

"I thought about how to make it natural to feel the light that touches the object in space," Jo said. "Imagination was required for actors and staff on the spot. There were difficulties, but everyone carried out the task of shooting with expectations on how the movie would come out."