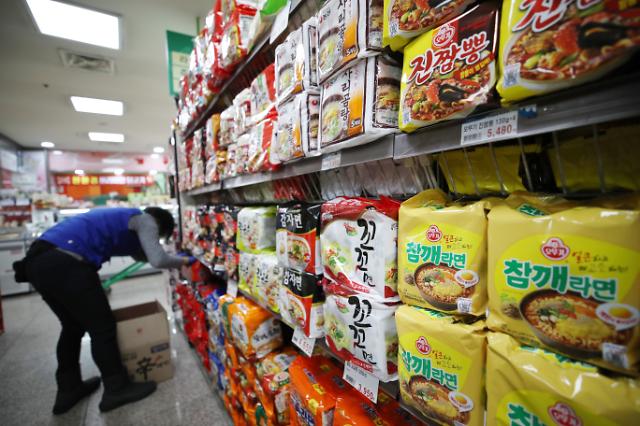 
SEOUL -- Exports of South Korean instant noodles known as ramyeon soared 29.3 percent on-year to a record high of $603.6 million in 2020, state data showed. COVID-19 boosted demands for ramyeon, which has been favored by consumers who spend more time at home. The tally did not include ramyeon produced at overseas factories run by Nongshim and other South Korean companies.

According to the Korea Customs Service, China stood first with $150 million, or 24.7 percent of South Korea's total ramyeon exports. The United States was second with $82 million, followed by Japan with $55 million and Thailand with $27 million.

Nongshim saw a sharp increase in ramyeon sales in 2020 thanks to the popularity of "Jjapaguri," a mixture of two different instant noodles, that was translated into Ram-don in Parasite, the Oscar-winning film directed by Bong Joon-ho. Parasite used Ram-don to depict the rich-poor gap. In the film, the rich housewife asked her housemaid to prepare a bowl of Ram-don for her son while driving back from a camping trip. Not exactly knowing what the recipe was, the housemaid created a combination of Chapaghetti, an instant black bean sauce noodle, and Neoguri, an instant noodle with spicy seafood soup.