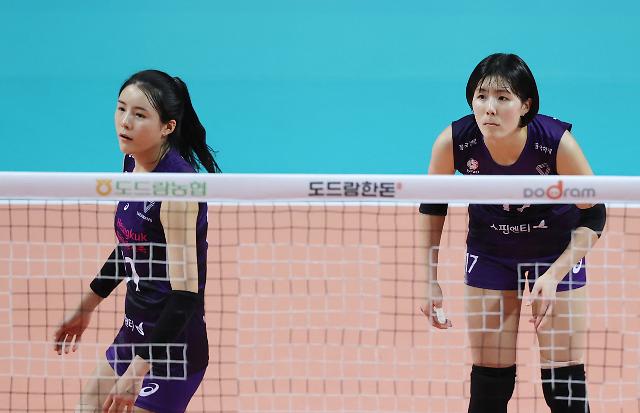 SEOUL -- Professional volleyball's growing popularity in South Korea came crashing down over the Lunar New Year long weekend, as the league's star players got embroiled in a scandal over their checkered pasts as bullies.

The V-League, run by the Korean Volleyball Federation (KOVO), saw cable TV ratings for some big matches rival or even surpass those of baseball, the nation's No. 1 sport, in recent years. It is now reeling from allegations, since acknowledged by the implicated individuals, that some of its biggest names had physically, verbally and emotionally abused their old teammates as teenagers.'

First, it was the twin sisters Lee Jae-yeong and Lee Da-yeong, who both play for the Heungkuk Life Pink Spiders. Last Wednesday, they apologized to their former elementary and middle school teammates for their bullying, in response to a long list of allegations raised by one ex-teammate online the previous day.

The Lees were suspended indefinitely by the Pink Spiders on Monday. The team is in first place with seven regular season matches remaining. Within hours of the club's decision, the Korea Volleyball Association (KVA), the sport's amateur governing body, said the twins will be banned from the national team indefinitely.

The Lees helped South Korea punch a ticket to the Tokyo Olympics by winning the Asian qualifying tournament in January 2020. But the KVA rule book states that any athlete or official who causes "social disturbances" with misconduct may not represent the country in international competitions. The KVA's online message board had been bombarded with calls for the players' permanent ban from the national team.

On Saturday, it was two male players, Song Myung-geun and Sim Kyoung-sub of the OK Financial Group OKman, who had to confront with their own bullying history. They, too, apologized for their misconduct after one former student-athlete alleged that he had been assaulted by Song in high school and Sim in middle school. Song and Sim both offered to sit out the rest of the season on Sunday, and the team promptly agreed that the issue is more important than its playoff push.

OK Financial Group was in third place through the weekend, in a playoff position with seven matches remaining.

Gory details of the allegations against these players will be spared here, though it must be noted that their victims claimed to have suffered significant physical injury and emotional distress due to bullying. In this light, talks of protecting these perpetrators of bullying against mounting backlash didn't make for good optics. Heungkuk Life was blasted for its failure to read the room when a team official said Thursday that the twins will first have to take some time off to regain their "emotional and physical well-being" before any discussions on their punishment could be held.

Critics pointed out that it was the victims, at least as much as the Lees and if not more, who had suffered, and that the two players deserved to be punished immediately. The question of whether they should be penalized for things they'd done before turning pro was quickly shoved aside, considering the severity of the twins' alleged misconduct.

The club came to its senses Monday morning by suspending the Lees indefinitely. "We feel a deep sense of responsibility to all fans of volleyball that we've let down," the Pink Spiders said in a statement. "Bullying among student-athletes must never occur and can't be tolerated under any circumstances. Given the gravity of the situation, we have decided to ban the two athletes indefinitely."

That both Heungkuk Life and OK Financial Group were in playoff positions when these allegations emerged should be of secondary concern, though the women's team didn't act like it at first. The KVA also cited the need to hold itself accountable over the twins' past. In recent years, the twins had been mainstays on the national team, with Jae-yeong as an outside hitter and Da-yeong as a setter. But the KVA decided trying to win an Olympic medal in Tokyo was not as important as punishing the twins for their alleged misconduct.

With the two clubs and the national governing body having taken action, the ball is now in the court of the KOVO. The KOVO has no precedent with school bullying cases involving its athletes, though a recent example can be found in baseball.
(Yonhap)