Vueron tests autonomous driving on highway only with Lidar sensor 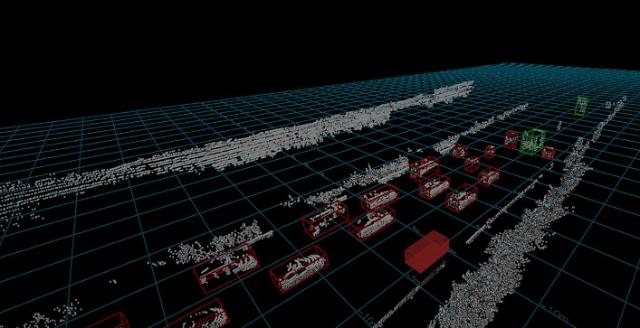 SEOUL -- A self-driving vehicle has made a successful run on an expressway using only a Lidar sensor produced by Vueron Technology, a start-up formed by engineers from South Korea's state-run research university. Lidar, which measures distance by illuminating the target with laser light, is a key element in autonomous driving.

Vueron said that the self-driving vehicle equipped with one radar sensor capable of detecting 360 degrees drove 414 kilometers (257 miles) on an expressway between Seoul and the southern port city of Busan at a maximum speed of 100 km per hour. For safety reasons, the driver was on board but did not hold the steering wheel for five hours.

Self-driving cars usually use various sensors such as Lidar, camera, radar and GPS at the same time. Vueron, which provides the lidar perception software for automotive vehicles, has implemented stable autonomous driving by utilizing only one Lidar sensor. "We will increase the number of domestic and foreign partners and actively hire them to further upgrade our technology," said Vueron CEO Joseph Kim.

To complement the weakness of existing Lidars that show low performance in adverse weather conditions, researchers have tried to develop a high-performance system that can be utilized in autonomous driving and diverse industrial areas. At CES 2020 in Las Vegas, SK Telecom showcased a Lidar sensor capable of detecting objects at a distance of up to 500 meters.