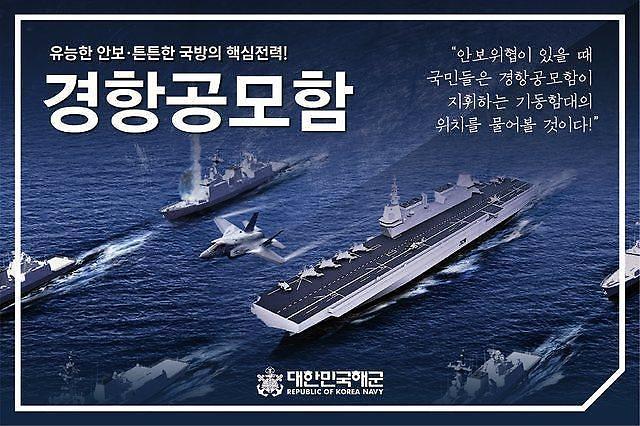 SEOUL -- South Korea's military formalized a project to develop a light aircraft carrier capable of carrying vertical landing combat jets despite unresolved disputes over its necessity. Some 2.33 trillion won ($2.09 billion) will be spent from 2022 to 2033 only on basic design and construction with indigenous technology, although it requires extra expenses to purchase weapons, aircraft and other equipment.

The so-called CVX project got the nod at a conference chaired by Defense Minister Suh Wook on February 22, according to the Defense Acquisition Program Administration (DAPA), a state body in charge of acquiring military equipment. The total cost will be fixed through a feasibility study later, the agency said in a brief statement.

The defense ministry came up with the idea of building a 30,000-ton light aircraft carrier manned by more than 400 crew members in August 2020, causing debate over whether South Korea really needs an expensive ship for far-seas operations. In its latest statement, DAPA explained the justification and necessity of an aircraft carrier, even if it's smaller than conventional ones, saying it would "quickly respond to various security threats and contain provocations in disputed waters."

To cope with an ever-growing arms race in Northeast Asia, South Korea has envisioned a smart navy because it's not able to gain a quantitative advantage over its neighboring countries. South Korea's naval buildup program is basically aimed at keeping North Korea in check. However, military leaders now openly talk about a naval fleet covering the ocean beyond coastal waters, based on accumulated technical skills in the fields of missiles, warships and electronic equipment.

The defense ministry has formed a research team to see if its Dokdo-class landing ship can be revised to load vertical landing combat jets and to preemptively secure core technologies such as coating materials that protect the deck, the simulation of aircraft take-off and landing, an ammunition transfer system and the reduction of underwater radiated noise.

The CVX project can be ditched if the defense ministry fails to secure national consensus and parliament approval. The ministry should also solve a dispute over the type of vertical landing jets. Defense firms support a bigger aircraft carrier to accommodate the variant of home-made KF-X fighter jets that would be delivered from 2021. Home-made planes are inefficient in terms of price and performance as carrier planes should be modularized and have a strong skeleton and landing gear.

The operation of F-35Bs for aircraft carriers is restricted in terms of military support or weapon loading. Critics say F-35Bs have limitations in removing ballistic missiles hidden in tunnels. As an alternative, F-35Cs were proposed because the model features large wings that can be folded and can carry 8,960 kilograms of fuel for a long-term operation. However, Navy officials think F-35Cs require aircraft carriers with wide decks and trained pilots who can use ejectors.