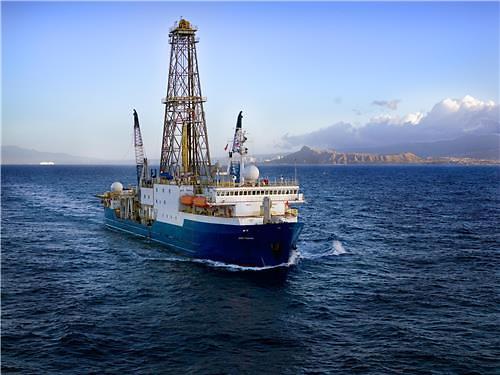 [Courtesy of Korea Institute of Geoscience and Mineral Resources]

SEOUL -- A scientific drilling ship used by the International Ocean Discovery Program, a multi-drilling platform research program, will be able to explore an oceanic basin between the Korean peninsula and Japan probably in 2024 on a mission to find out the cause of frequent submarine landslides.

A submarine landslide transports sediment across the continental shelf and into the deep ocean. It can cause significant damage to both life and property. Common causes of marine landslides include weak geological layers, overpressure, earthquakes, gas hydrate dissociation, glacial loading, volcanic island growth and over-steepening.

Initial approval has been made for drilling by the Integrated Ocean Drilling Program (IODP) in 2024 at the basin south of Ulleung-do, an island east of mainland South Korea, the state-run Korea Institute of Geoscience and Mineral Resources (KIGAM) said, adding that final approval would come in June. The Ulleung Basin, known as Tsushima Basin in Japan, is located between the Korean peninsula and Japan.

IODP has used heavy drilling equipment mounted aboard scientific drilling ships including JOIDES Resolution, a riserless research vessel know as JR, to monitor and sample sub-seafloor environments. KIGAM said IODP's drilling would contribute to the undersea geology and sedimentary structure of Ulleung Basin and the exploration of deep-sea resources.

"IODP's drilling in the East Sea Ulleung Basin will be able to save astronomical drilling costs," KIGAM President Kim Bok-chul said, adding that South Korea would join IODP's undersea resources exploration through a new 5,000-ton research ship to be built in 2024. Hanjin Heavy Industries has won KIGAM's order worth 167.7 billion won ($151 million) in early February to build the vessel which will be
92 meters long. The new vessel designed jointly by the Ulstein shipyard in Norway and Hanjin Heavy can carry 50 crew members and sail at up to 15 knots (28 km per hour).

The new KIGAM vessel will be equipped with state-of-the-art equipment for research on undersea energy resources and marine faults in three and four dimensions as well as satellite positioning and automatic navigation systems. Noise control technology will be adopted to receive uninterrupted sound waves. KIGAM will use the vessel to determine the location of hazardous facilities such as nuclear power plants and investigate suitable areas to trap greenhouse gases in the seabed.