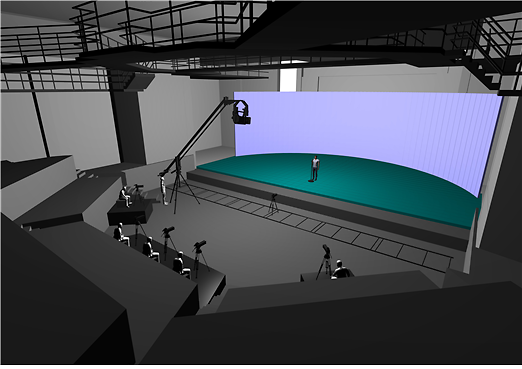 A blueprint released by the culture ministry shows the state-run K-pop concert hall. [Courtesy of the Ministry of Culture, Sports and Tourism ]


SEOUL -- A state-run K-pop concert hall optimized for online concerts will be built in South Korea to foster non-face-to-face performances as a new industry and support small and medium-sized labels, rookies and indie musicians who cannot produce online performances due to the high cost of production. It will be equipped with state-of-the-art technologies and equipment.

A multi-purpose performance hall in the Olympic Park in southeastern Seoul will be reborn into an online concert center with an injection of 20 billion won ($17.8 million), the Ministry of Culture, Sports and Tourism said in a statement on March 3. The renovation will be completed in October.

South Korea's popular music industry has been hit hard by a COVID-19 pandemic that prompted artists to cancel offline concerts. However, BTS changed the paradigm of concert events by holding paid online concerts. The domestic music industry is now trying to find a new business model by benchmarking BTS concerts, but high costs are the biggest problem.

"How to create globally differentiated content by combining offline content and advanced technologies is an essential element for the development of the future content industry," an unnamed ministry official said in a statement on March 3, adding that online concerts have become an area of new cultural content. "We hope that South Korea will dominate the global non-face-to-face online performance market and contribute to the spread of Hallyu (Korean cultural wave) through the convergence of various content and technologies owned by small and medium-sized agencies."

An object tracking system tracks the location of actors and objects, calculates correlations, and transmits special effects or virtual and augmented reality graphics generated in real-time to a real-time screen to enhance the reality of virtual and real worlds. A real-time content server produces and transmits high-quality 3D content images.