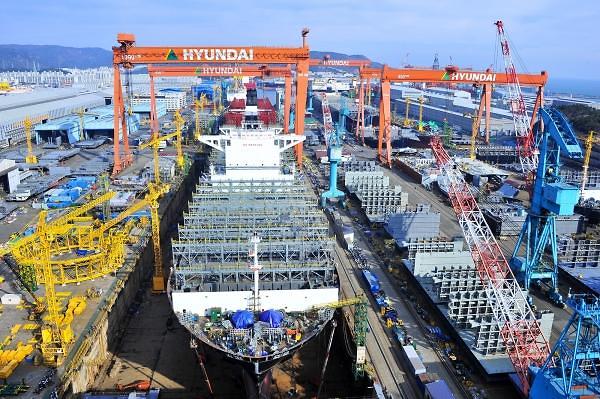 Hyundai Heavy Industries Holdings signed a memorandum of understanding on March 3 with Aramco, which is the second-largest shareholder of Hyundai Oilbank, a refinery arm of the shipbuilding group. "With hydrogen and ammonia, we will become a leading group in eco-friendly energy," said Chung Ki-sun, an executive vice president in charge of management support.

Hyundai Oilbank will receive blue ammonia from Aramco and use it as fuel for liquefied natural gas boilers to be established by 2024. Ammonia, which is a combination of nitrogen and hydrogen, is highlighted as the top resource to establish an eco-friendly hydrogen fuel cell-based infrastructure. Because concentrated hydrogen in a gas state is dangerous to handle, it is liquefied or converted into ammonia for transport.

The shipbuilding group and Aramco would also strengthen cooperation in shipbuilding and develop ships capable of carrying LPG and CO2 at the same time as well as ammonia transport and propulsion ships. The International Energy Agency (IEA) predicts that the use of ammonia and hydrogen for ship fuel will gradually increase. Compared to other alternative fuels, ammonia is seen as a more suitable ship fuel for the post-carbon era due to its stability in supply and relatively easy storage and transportation.