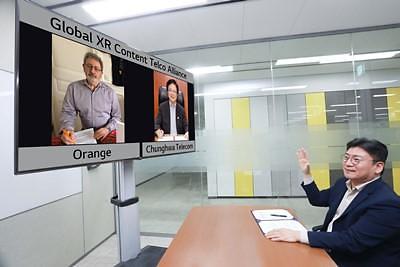 Extended reality (XR) or Cross Reality encompasses a wide spectrum of hardware and software that enable content creation for virtual reality (VR), mixed reality (MR) and cinematic reality. Users can generate new forms of reality by bringing digital objects into the physical world and bringing physical world objects into the digital world. XR technologies have applications in almost every industry.

"In order for XR content to become popular, we need high-quality killer content that can be enjoyed by men and women of all ages, such as blockbuster movies," LGU+ 5G service business head Choi Yoon-ho said in a statement on March 10. He said that the XR alliance has laid a cost-effective and technical foundation for producing high-quality realistic media.

The alliance selects content to be produced through regular meetings and expands the scope of realistic content to various fields such as performances and documentaries of sports stars while making new attempts by implementing two or more technologies at the same time or merging new technologies. A 3D VR video series showing a spacewalk shot in real space at a space station will be released sequentially in November as the first content to be produced by the XR alliance.

Felix & Paul Studios, a Canadian realistic content production company, works with the National Aeronautics and Space Administration (NASA) and others to capture a video from the International Space Station (ISS), a modular space station in low Earth orbit, for the first time in 3D VR. LGU+ said that for its second project, the alliance will review famous performances, fairy tales and animations.