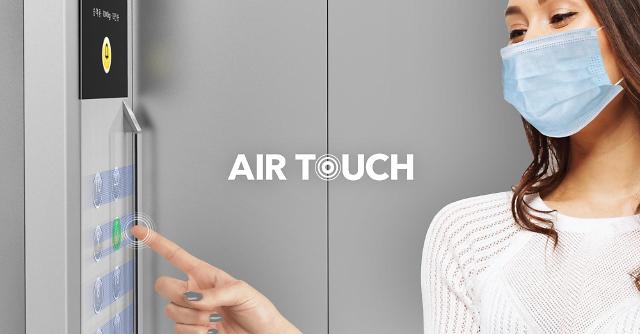 
SEOUL -- Hyundai Elevator, a leading elevator maker in South Korea, unveiled a new contactless button called "Air Touch" that allows users to enter the target floor without pressing the button by using infrared sensor technology. Customers can go to the floor they want just by putting their fingers in front of the button. After completing a reliability test, the company will apply contactless buttons to actual sites from the end of March.

Existing contactless buttons for elevators apply infrared sensors to each button, so errors occur when cleaning or visually impaired people contact. Hyundai Elevator said in a statement on March 16 that Air Touch applied a location recognition method to prevent errors. A sensor installed on the side of the target floor call button recognizes movements 14 to 20 mm away from the button. Air Touch can be additionally applied to elevators installed already.

"Because it recognizes and controls the movement of passengers' fingers with infrared sensors, it is also possible to implement a new type of target layer input systems that apply virtual floor buttons," an unnamed company official was quoted as saying. ​

The coronavirus pandemic has called for the enhanced hygiene of elevators. Antibacterial films and materials are widely used in South Korea for elevator cabins, door handles and other vulnerable places to prevent the invasion of viruses.