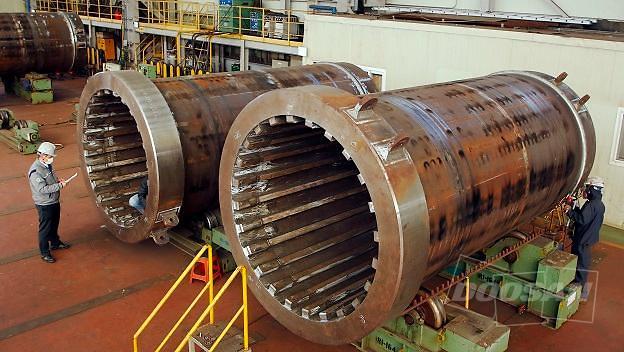 Spent fuel rods from nuclear power plants are first kept in storage pools of water, which provide cooling and shielding against radiation. After 7 to 10 years in wet storage, they can be transferred to storage. Dry cask storage is a method of storing high-level radioactive waste. The key component of casks is a steel cylinder. Each cylinder is surrounded by additional steel, concrete, or other material to provide radiation shielding.

Doosan Heavy said its vertical concrete casks would be used by Three Mile Island Nuclear Generating Station (TMI) in Pennsylvania. The company has an additional contract with NAC to supply two sets of canisters in June.

"Through business cooperation with NAC, we have set the stage for full-scale entry into the overseas cask market," Na Ki-yong, head of Doosan Heavy's nuclear power plant BG, said in a statement on March 25. "As continuous demand is expected in South Korea, we will actively target the domestic and foreign cask markets."

Casks are divided into transport, storage, and a combination of transport and storage. Under a technology transfer deal with NAC, Doosan Heavy developed a dry storage system in 2017. Since then, the company has upgraded design capabilities to produce new models with increased storage capacity. It has sent an application to the U.S. Nuclear Regulatory Commission (NRC) for design approval.

Doosan Heavy said it has created a domestic supply chain with small and medium-sized suppliers to supply casks with safety and economic feasibility. South Korea has been locked in an endless debate over how to handle piles of spent nuclear fuel rods from 24 nuclear power plants. Nuclear waste is a stringent issue due to a U.S. ban on reprocessing to prevent potential proliferation in Northeast Asia.

Korea Hydro & Nuclear Power (KHNP), the state-run operator of nuclear power plants, has called for a quick solution, saying storage facilities would have no more space to store nuclear waste in March 2022.

President Moon Jae-in has announced his "nuclear-exit" policy of phasing out nuclear power plants. South Korea, which has almost no reserves of fossil fuels on its territory, has pushed for a nuclear energy program, but Japan's 2011 nuclear meltdown in Fukushima drew unwelcome attention to the use of nuclear energy. Washington has refused to revise a 2015 accord that effectively restricts reprocessing. U.S. officials have insisted that wider concessions on reprocessing could complicate efforts to denuclearize the Korean peninsula.