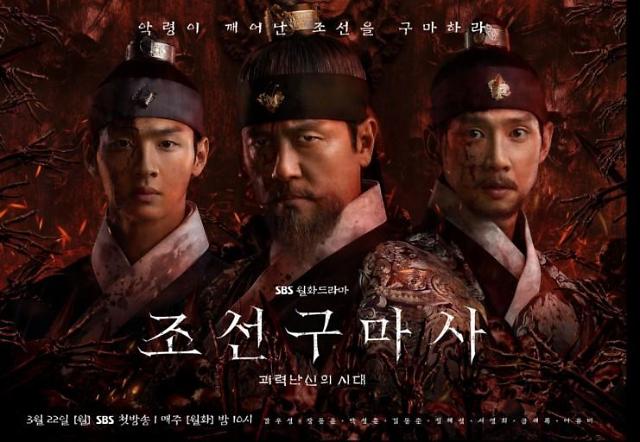 SBS, a national TV network, said in a statement on March 26 that it decided to cancel its new drama, "Joseon Exorcist," after feeling "heavy responsibility," although the production company finished filming 80 percent of the series starring Jang Dong-yoon, Park Sung-hoon and Kam Woo-sung.

The drama depicted the story of Taejong, the third king of the Joseon dynasty (1392~1897), and his two sons fighting evil spirits and demons who helped the founding rulers of Joseon but returned later to target the royal family. After it was premiered on March 22, the drama triggered criticism from historians.

Taejong was seen slaughtering innocent villagers after having a hallucination of his deceased father. Through his YouTube channel, Hwang Hyun-pil, a lecturer in Korean history, blasted the drama's scenario writer, Park Gye-ok, for distorting history. "I think he is a writer who has great pride in Chinese history."

More serious is a public backlash against Chinese-style stage props used for a scene where exorcists eat and drink. As public anger grew, corporate sponsors pulled ads and local governments withdrew their support for the production of the series. Producers and distributors moved to terminate overseas copyrights and streaming services.

Lotte Entertainment, a film production and distribution company that participated as a co-producer, announced the withdrawal of investment. "We feel moral responsibility acutely for the inconvenience caused to viewers."

China has used authoritative academic research to restore historical facts and protect the stability of Northeast China. Any pre-modern people or states that occupied any part of what is now the People's Republic of China is defined as having been part of Chinese history. But it has been criticized for applying the contemporary vision of China as a "unified multiethnic state" to ancient ethnic groups, states and history.

The project aimed at redefining the ancient history of China to describe ancient Korean kingdoms as China's has fanned anti-Chinese feelings,  although political leaders in Seoul remained cool-headed not to hurt relations with Beijing.

Anti-Chinese sentiment has been already simmering especially among conservative groups since China took retaliatory steps in 2017 over the deployment of an advanced missile shield by American troops in South Korea. Seoul and Washington said the shield is aimed at monitoring North Korean missiles, but Beijing insisted it would "seriously" hurt China's strategic interests and the security balance in Northeast Asia. Theoretically, the radar can monitor missile movements in eastern parts of China.