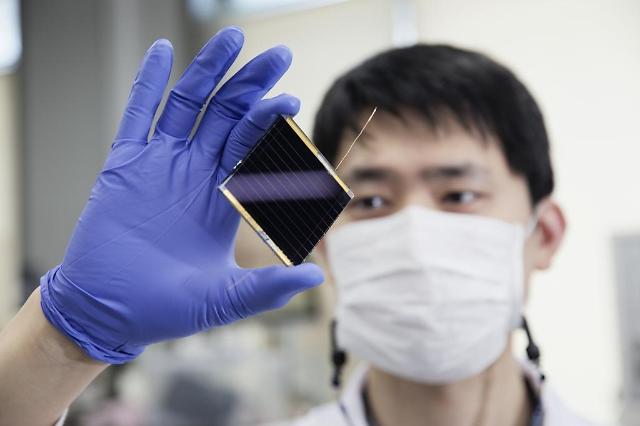 SEOUL -- A team of researchers based in South Korea and Switzerland set a new record of 25.6 percent in the power conversion efficiency of perovskite solar cells by introducing an anion engineering concept that uses pseudo-halide anion formate to suppress anion-vacancy defects and augment crystallinity.

Perovskite derivatives have been investigated to overcome instability issues with lead-based organic perovskite materials in ambient air and reduce the use of lead. Researchers have introduced various methods to improve conversion efficiency.

An engineering concept using formate, which is the anion derived from formic acid, was introduced by researchers from the Ulsan National Institute of Science and Technology (UNIST), the Korea Institute of Energy Research (KIER) and the Institute of Chemical Sciences and Engineering (EPFL) in Lausanne.

"It is significant in that it is the world's first to discover that a formate can interact with surrounding elements in anionic position within a perovskite crystal," said Jeong Jae-ki, a UNIST professor of energy engineering. "This study suggests a new direction for perovskite material research."

Metal halide perovskites have great potential as light harvesters for thin-film photovoltaics, the research team said in the abstraction of its paper published on the website of Nature, a science journal.

"The cubic α-phase of formamidinium lead triiodide has emerged as the most promising semiconductor for highly efficient and stable perovskite solar cells, and maximizing the performance of this material in such devices is of vital importance for the perovskite research community," the team said.

The anion engineering concept uses the pseudo-halide anion formate to suppress anion-vacancy defects that are present at grain boundaries and at the surface of the perovskite films and to augment the crystallinity of the films. As a result, solar cell devices attained an efficiency of 25.6 percent and showed long-term operational stability, the team said.

"Our findings provide a direct route to eliminate the most abundant and deleterious lattice defects present in metal halide perovskites, providing a facile access to solution-processable films with improved optoelectronic performance," the team said.

In September 2020, UNIST and KIER researchers fabricated perovskite solar cells by synthesizing hydrophobic fluorinated analogs of the complex organic molecule called Spiro-OMeTAD as hole-transporting materials that have the favorable shifting of the electronic state for hole extractions. A champion device had a certified power conversion efficiency of 24.8 percent.

South Korean companies and researchers have tried to develop new solar energy technologies such as tandem cells that build perovskite on top of silicon solar cells. Tandem solar cells can be individual cells or connected in series, which are simpler to fabricate but the current is the same through each cell.