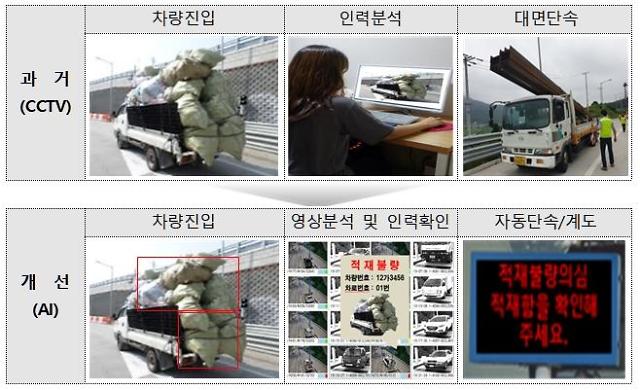 SEOUL -- Expressway operators will scale up the demonstration of an artificial intelligence-based system to monitor and detect overloaded vehicles. The system was found to be effective through a six-month test operation that began in November 2020.

Overloaded vehicles cause damages to the road surface and create potholes. Drivers are not easy to control the movement of overloaded trucks. About 57 percent of fatal accidents that took place on expressways in June 2020 were caused by overloaded trucks, according to the Ministry of Land, Infrastructure and Transport.

The Korea Expressway Corporation said in a statement on April 8 that it would expand the deployment of AI-based monitoring systems at expressway toll gates around Seoul and neighboring cities in 2021. The final goal is to create a nationwide monitoring network by 2024.

Monitoring systems are installed at toll gate checkpoints, and trucks are required to come to a full stop for camera monitoring. The expressway operator said the system reduced the workload of monitoring workers by 85 percent and increased the number of violation cases by 470 percent.

"We found the AI monitoring system is very effective. Hopefully, we will be able to reduce the number of accidents on expressways," said Lee Byung-joo who manages the development of an intelligent transport system. Lee said the monitoring system would become more accurate by collecting and analyzing data through deep learning.