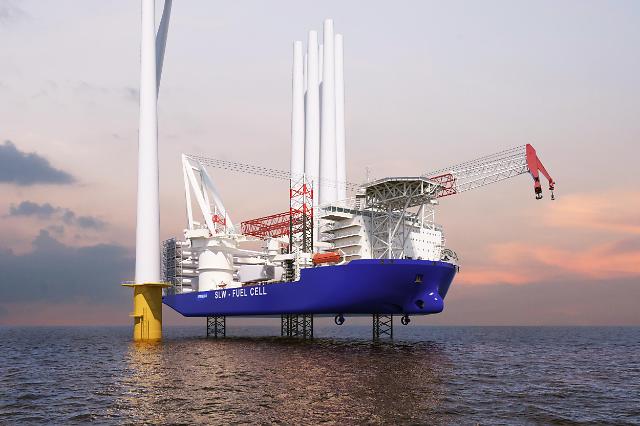 
SEOUL -- Samsung Heavy Industries, a major shipbuilder in South Korea, has acquired original technologies for the construction of a wind turbine installation vessel (WTIV) featuring eco-friendly technologies. The vessel is designed for the installation of offshore wind turbines. Similar to a jack-up rig, it is self-elevating.

The shipbuilder said it has applied eco-friendly technologies such as a dual propulsion system for liquefied natural gas, solid oxide fuel cell (SOFC) technology and an energy storage system (ESS) to reduce CO2 emissions by up to 50 percent compared to conventional diesel-engine ships, making it suitable for enhanced environmental regulations.

ESS is a power storage system that consists of batteries or specially designed battery packs. SOFC is an electrochemical conversion device that produces electricity directly from oxidizing fuel. SHI has partnered with Bloom Energy, an American public company, to develop core technologies for highly efficient SOFCs for ships.

"It means a lot as we have an independent model with advanced eco-friendly technologies," SHI's offshore business division head Lee Wang-geun said in a statement on April 8. He said the growth of wind power markets would expand the demand for WTIVs. SHI has accumulated technology and experience by delivering three WTIVs since 2010.

In a confident tone, SHI said that the shipbuilder is now able to gain a strong competitive edge by reducing costs caused by its dependence on foreign firms that have monopolized WTIV design technology. SHI has partnered with Hyosung Heavy Industries to localize crucial technology for a jacking system capable of withstanding up to 2,500 tons of crane load by supporting a 40,000-ton WTIV from the sea.