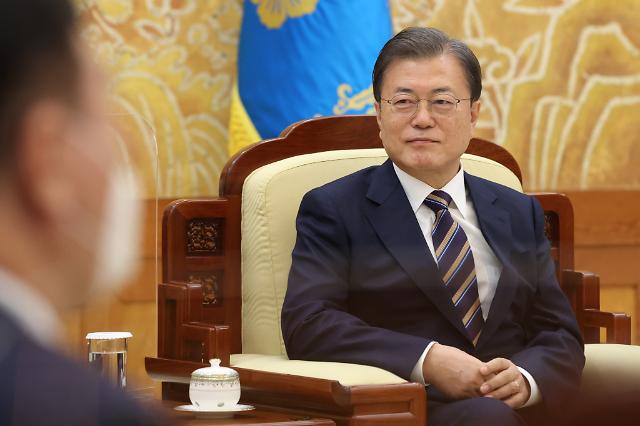 SEOUL -- President Moon Jae-in welcomed a last-minute compromise to end a prolonged legal dispute between two major battery makers in South Korea, saying it would serve the national interests and long-term interests of each company at a time when the stability of a supply chain is becoming more important.

"It is fortunate that LG and SK, which have grown to be the world's leading players in secondary batteries, have decided to end all legal disputes," Moon said in a post through Twitter on April 12 after SK Innovation (SKI) and LG Energy Solution (LGES) reached an overnight settlement through negotiations mediated by the administration of U.S. President Joe Biden.

SKI agreed to pay two trillion won ($1.78 billion) in compensation, and the two companies will not file suits for ten years. One trillion won will be paid in cash for two years from 2021. For the remainder, SKI will pay a certain portion of annual battery sales revenue from 2023.

Both LG and SK groups nurture their battery-making businesses as their next cash cow through a steady injection of capital for pre-emptive facility investment and technical development. Their legal fight has affected the nerves of South Korean policymakers who want a concerted push among domestic companies to join forces against foreign rivals especially in China.

"The recent global economic environment is accelerating technological change and the stability of a supply chain is becoming more important," Moon said. "The agreement is very meaningful as in that competition between members of the domestic industrial ecosystem and collaboration based on mutual trust serve national interests and long-term interests of individual companies."

The compromise is aimed at strengthening competitiveness in the rapidly growing battery market rather than being bound by "wasteful litigation," SKI CEO Kim Jun said in an email to company members, vowing to accelerate the construction of a $2.6 billion plant in Georgia and actively promote additional investment in U.S. and other markets.

Shares of SKI and LGES rallied as the agreement cleared uncertainty over their businesses. Market watchers think SKI benefits more as both companies made concessions from SKI's previous claims of one trillion won and three trillion won demanded by LGES.

"It's more favorable news for SK Innovation and exerts a positive impact on South Korea's secondary battery industry," Han Sang-won, a Dashin Securities analyst, said, adding the deal resolved uncertainties about battery business by SKI and LGES in the U.S. and the extreme discount of their battery business value as well.

For SKI, which has 2.94 trillion won in cash, Han said there would be no significant financial burden due to an inflow of cash from the sale of old stocks by its material making subsidiary, SK IE Technology (SKIET), and mines in Peru. "The amount of cash payments is one trillion won and it is able to respond without additional borrowing."

SKI's board has approved the sale of stakes in two Peruvian gas fields for 1.25 trillion won to Argentine oil firm Pluspetrol in an effort to cope with uncertainties caused by a COVID-19 pandemic and invest more in battery manufacturing. SKI aims to secure a capacity of 60 GWh (gigawatt hours) by 2022.

SKI suffered an overall business setback due to a COVID-19 pandemic. In 2020, losses were sharply up in the petrochemical and chemical sectors, but the battery division did well, with sales jumping to a record high of 1.6 trillion won from 690 billion won a year ago. In January, SKI earmarked 1.26 trillion won to build a third battery plant in Europe through its subsidiary in Hungary.

In March, SKI's board approved a new investment of 1.13 trillion won to increase the production of core materials for electric vehicle batteries in Poland through SKIET, which has lithium-ion battery separator (LiBS) plants in South Korea and China.

LGES CEO Kim Jong-hyeon said in an in-house message that his company is able to step up its push for global expansion. "We will play an active role in expanding battery supply on a large scale and successfully spreading electric vehicles through excessive and preemptive investments."

In March, LGES unveiled a new investment of more than five trillion won by 2025 to secure an independent production capacity of more than 70 GWh in the U.S. alone. The company has a 5GWh plant in Michigan with its 35GWh joint venture plant with General Motors under construction in Ohio.