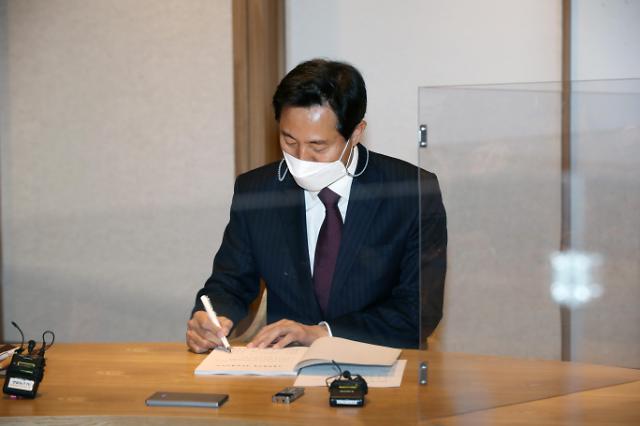 SEOUL -- The newly elected mayor of Seoul who won a landslide victory in a by-election in April as an opposition party candidate rekindled debate over whether South Korea should introduce COVID-19 diagnostic kits for self-testing at home to acquire rapid results. There is no officially licensed method for easy and quick sampling.

At a high-level COVID-19 conference that sets the direction of anti-epidemic policies, Seoul Mayor Oh Se-hoon made a strong proposal for the use of self-testing devices, including antigen testing, which have already been used abroad to check the results of tests in 10 to 30 minutes. "The pilot project using the rapid antigen inspection kit will also be reviewed," Oh said in a press briefing on April 12.

The Korea Centers for Disease Control and Prevention (KCDC) trusts nasopharyngeal swabs for the real-time polymerase chain reaction (PCR) method that amplifies specific DNA samples as the most reliable and accurate method.

"According to experts, continuous and repeated use increases sensitivity and accuracy," Oh said, suggesting that an inspection can be conducted before entering business sites to ease a financial pinch that has driven many restaurants, pubs and entertainment facilities into the corner. Even if quick testing produces positive results, health authorities should make a final decision through PCR testing,

Yoon Tae-ho, a senior anti-epidemic center official, said the introduction of quick sampling will be reviewed. "If permission is granted, we believe that a pilot project will be possible in Seoul," he said, passing the responsibility on to the Ministry of Food and Drug Safety. Rapid test kits can be used only for urgent surgery, but health officials have hinted at easing their tough stance to introduce a rapid inspection of vulnerable facilities.

In February, Science and ICT Minister Choi Ki-young said that a semiconductor-based fast test kit using saliva is under development by hospitals, research groups and companies. Hanmi Pharmaceutica has developed an antigen test kit to acquire results in 30 minutes by dropping samples taken from the nasal cavity to the kit like pregnancy diagnosis.