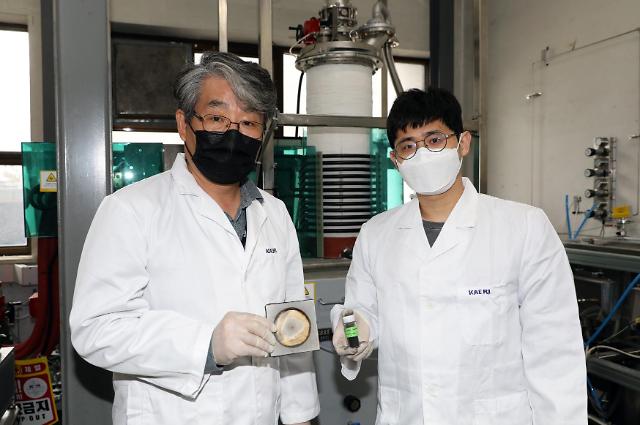 The Korea Atomic Energy Research Institute (KAERI) said its research team has converted low-level radioactive waste into boron carbide to prevent a chain of fission in transport and storage, or into neutron absorbers. Nuclear power plants use activated carbon for air purification and boric acid as a reactor moderator.

"Just as general industrial waste is recycled, radioactive waste can bring great innovation in the management of radioactive waste in South Korea," Park Hwan-seo, a senior KAERI researcher, said in a statement on April 13. Commercial use is possible through further research, he said.

The new method can reduce the cost of purchasing expensive neutron absorbers which are used to control the power of a reactor, or to prevent a chain of fission when storing and transporting nuclear materials, Park's team said.

Activated carbon has the properties of heating when absorbing microwave. If a high-power microwave device quickly heats spent activated carbon and dried boric acid waste to 1,500 degree Celsius or higher, most substances except carbon and boron are separated by volatilization, the team said. Carbon carbide is a representative substance with excellent neutron absorption. Carbon and boron can be synthesized into boron carbide (B4C) and used as neutron absorbers.

The amount of waste can be further reduced by using ultra-low-level metal waste, which is generated during operation and dismantlement, to produce support for neutron absorbers, the research team said, describing its technology as a new method that gives value to synthesize, reconstruct and utilize three different radioactive waste.

When the new technology is used in the dry storage of spent nuclear fuel, it can reduce the cost of purchasing neutron absorbers and eliminate the burden of disposing of used neutron absorbers. Nuclear waste is a stringent issue due to a U.S. ban on reprocessing to prevent potential proliferation in Northeast Asia.

Spent fuel rods are first kept in storage pools of water, which provide cooling and shielding against radiation. After 7 to 10 years in wet storage, they can be transferred to storage. For technical and political reasons, South Korea has no intermediate storage or permanent disposal facilities. Used nuclear fuel has been kept in interim storage facilities.

Environmental groups have opposed the construction of additional facilities. Korea Hydro & Nuclear Power (KHNP), the state-run operator of nuclear power plants, has called for a quick solution, saying storage facilities would have no more space to store nuclear waste in March 2022.