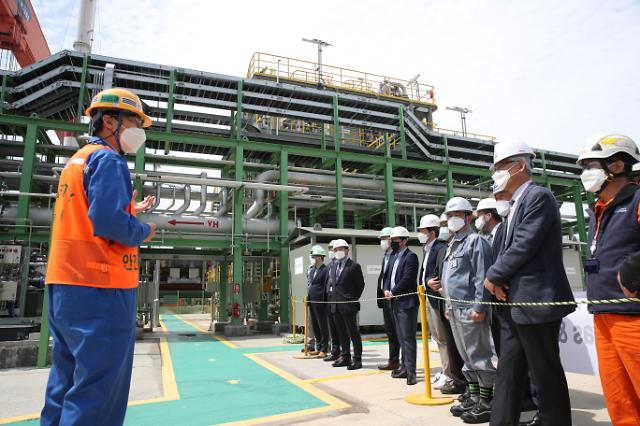 
SEOUL -- For the first time in the world, Samsung Heavy Industries, a major shipbuilder in South Korea, has successfully demonstrated a next-generation regasification system that links power generation utilizing liquefied natural gas cold energy. It is a new eco-friendly technology that can dramatically lower the cost of generating electricity.

Liquefied natural gas (LNG) needs to be gasified before supplied to users. The process releases a considerable amount of cold energy. The recovery of LNG cold energy bears the significance of energy-saving and environmental protection. Power generation is the most effective and suitable method for large-scale applications.

Samsung Heavy Industries (SHI) said that it has demonstrated a system called "S-REGAS (CGR)" by applying zero-carbon thermal energy conversion technology to a regasification system, which is a key technology of a floating storage regasification unit (FSRU). FSRU is a ship-type facility that can supply LNG directly to consumers on land after vaporizing it at sea.

S-REGAS can produce 16-megawatt electricity on its own, which is more than 90 percent of the power required for LNG regasification, the shipbuilder said, adding the new technology can reduce more than 60,000 tons of CO2 emissions per year.

"The shipbuilding industry is also strongly demanding the greater use of renewable energy for carbon neutrality," SHI's research head Lee Dong-yeon said in a statement on April 14. "This demonstration will serve as an important opportunity to inform the FSRU market that S-REGAS (CGR) is the safest and most reasonable eco-friendly solution."