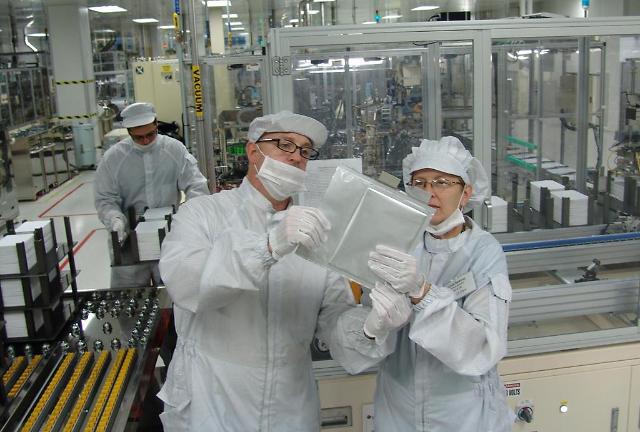 SEOUL -- The battery-making wing of South Korea's LG Group has joined two global initiatives RE100 and EV100 to go completely zero-carbon by 2030. The company is the 300th member to join the environmental initiative supported by companies such as Google, Apple, and General Motors.

The RE100 (Renewable Electricity) initiative is an international campaign that pushes participating companies to replace 100 percent of their electric power sources with renewable energy including wind farms, solar power plants, and micro hydropower plants by 2050. EV100 is designed to make electric transport the new normal by 2030. Both initiatives seek a drastic reduction in carbon emissions.

LG Energy Solution (LGES) said its membership was accepted by the operating bodies of RE100 and EV100 initiatives on April 15. The company promised to use 100 percent renewable energy by 2030, faster than a global green campaign. "Batteries are key products that play a pivotal role to achieve carbon neutrality," said LGES CEO Kim Jong-hyun.

LGES, which is already operating factories in the United States and Poland only by using renewable energy sources, will work on a green factory system in South Korea and China. The company would use electric engines for all vehicles weighing less than 3.5 tons with and at least 50 percent of trucks weighing more than 3.5 tons by 2030.

South Korea, which has a low renewable energy dependency rate of 4.8 percent in 2020, is trying hard to go greener by promoting the use of renewable energy and eco-friendly fuels such as hydrogen.

SK E&C, a builder affiliated with the country's third-largest conglomerate SK Group, joined hands with Solar Connect, a domestic energy IT company, in early April to develop a solar power generation platform for companies that joined the RE100 initiative. SK Group joined RE100 in 2020. Oriental Brewery, a major domestic brewery, joined the global net-zero emissions campaign in 2020 to add solar power generating facilities to beer factories.