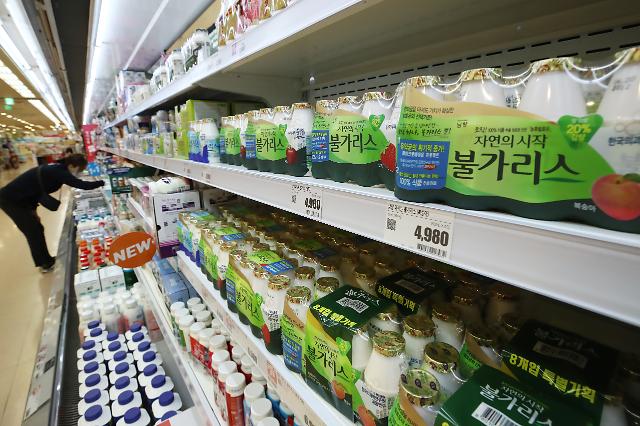 
SEOUL -- Namyang Dairy Products, a major dairy food producer in South Korea, apologized for causing public misunderstanding about the anti-virus effect of its fermented milk brand Bulgaris after a government body called for legal action to punish the company for deceiving consumers with "hyped" publicity.

Bulgaris contains complex strains such as lactobacillus, acidophilus and bulgaricus, more than regular fermented milk products. The effect of probiotic lactic acid bacteria (lactobacillus) strains on viral infection has been studied, and lactobacillus was found to provide many beneficial effects on human health.

A day later, Namyang's share prices soared in morning trading before falling sharply on verbal intervention by a state anti-epidemic control tower. The Korea Disease Control and Prevention Agency (KDCA), which leads South Korea's fight against COVID-19, sounded a note of caution, saying a study should be done to see if certain foods are effective in removing viruses from the human body.

"We apologize for causing misunderstanding related to COVID-19 among consumers, even though the effect could not be determined because it was the result of cell experiment, not clinical trials," Namyang said in a statement on April 16, promising to check the efficacy and value of fermented milk through animal and clinical trials.

Namyang, however, did not respond to an announcement released by a government public health agency the previous day that it would file complaints with authorities for an investigation to see if the company violated a food advertisement law. Violators can face business suspension for two months, a jail term of up to 10 years, or fines of up to 100 million won ($89,680).

The Ministry of Food and Drug Safety accused Namyang of releasing misleading information that researchers confirmed anti-virus effects of Bulgaris without undergoing animal or clinical tests.

"Food is not a medical product, so indications or advertising activities that (they) could be perceived to be effective in preventing and treating diseases are strictly prohibited," the ministry said in a statement on April 15. "The public is advised not to be misled by such false or hyped ads. We will actively block unfair illegal advertising activities that deceive consumers."

An emergency field probe found that Namyang was actively involved in research and distributed promotional papers in advance to media companies, the ministry said, adding that Namyang is suspected of having actually promoted Bulgaris products beyond pure academic purposes, although only one out of seven Bulgaris products was tested in a company-sponsored experiment.

Bulgaris has maintained its top position in the domestic fermented milk market since Namyang released it in 1991 by highlighting the story that it was developed based on lactobacillus fermented milk, which has been known as a health secret in Bulgaria, believed to be the birthplace of yogurt. Namyang's initial marketing was very successful, creating a public perception that Bulgaria is a country with many long-livers due to their eating habits.