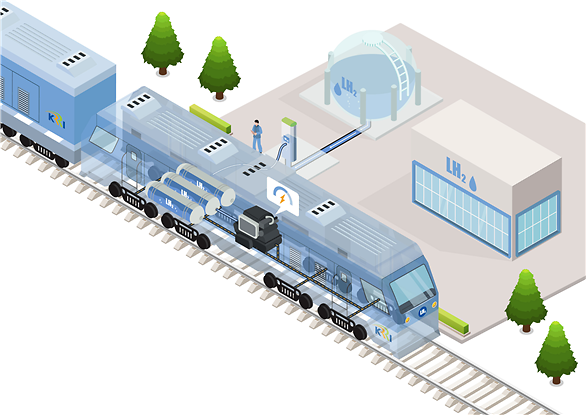 
SEOUL -- South Korea's state-run railway research body has embarked on the development of locomotives based on liquefied hydrogen ahead of other countries such as France, Germany, Japan and China which have jumped into the race to develop hydrogen engines that would replace diesel trains and generate no pollutants.

In a project involving Hyundai Rotem, a train-making subsidiary of South Korea's Hyundai auto group, and other companies, the Korea Railroad Research Institute (KRRI) aims to develop module-based fuel cell technology for locomotives that can operate at a maximum speed of 150 kilometers (93 miles) per hour and cover at least 1,000km on a single charge.

The institute said it would commercialize the world's first locomotive using liquefied hydrogen while other countries develop trains based on hydrogen gas. The liquefaction of hydrogen requires cooling to a temperature of minus 253 degrees Celsius and subsequent storage in cryogenic containers. The advantage of liquefied hydrogen is its high density compared to compressed gas, which means that more energy can be contained in a given volume for easy transportation.

"We will do our best to make liquefied hydrogen train technology a stepping stone to transform railway transportation into an eco-friendly hydrogen ecosystem," KRRI head Han Seok-yun said in a statement on April 20. KRRI said its locomotive installed with six 300kW modules would improve the train's mileage by 1.6 times compared to gas hydrogen trains and reduce charging time by 20 percent.

The institute hopes to put locomotives based on large-capacity liquefied hydrogen into practical applications in 2025 after testing a hybrid system, storage technology and fast charging technology on trams in the second half of 2022. President Moon Jae-in has called for the gradual phase-out of diesel passenger locomotives to reduce carbon emissions.

KRRI's blueprint came a day after Hyundai Rotem showcased a hydrogen-electric tram at its factory in the southern industrial city of Changwon. The company aims to develop trams capable of traveling more than 150km with a single charge at a top speed of 70 km per hour. A three-year pilot project will be carried out in the southern port city of Busan to establish a catenary-free light rail line covering 1.9 kilometers (1.18 miles).