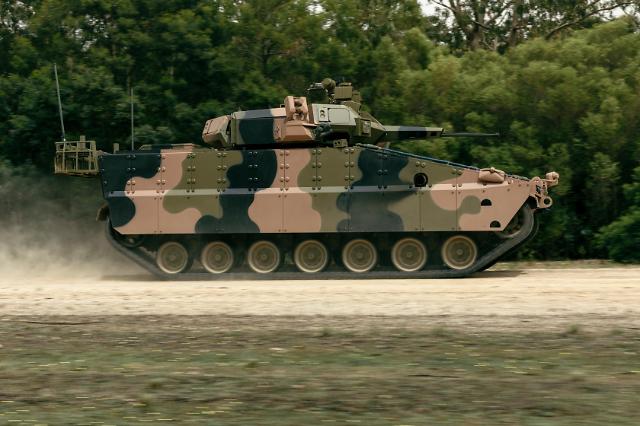 
SEOUL -- Hanwha Defense, a key defense contractor in South Korea, has signed an exclusive teaming agreement with Oshkosh Defense, a leading US defense company, for the digital design phase of the US Army's next-generation combat vehicle program intended to procure a variety of armored vehicles and replace existing platforms that are nearing the end of their service life.

The optionally manned fighting vehicle (OMFV) program is a key element of the US Army's modernization effort that includes replacing the M-2 Bradley infantry fighting vehicle which has seen service since the early 1980s. Hanwha Defense said that the program's five-phase acquisition plan would award the first contract in the fourth quarter of 2021.

"Bringing together the heritage of two innovative, reliable, and successful land systems companies gives me great confidence that Hanwha and Oshkosh, with our other consortium partners, will deliver the next-generation infantry fighting vehicle the American soldier clearly deserves," Bernard S. Champoux, head of Hanwha Defense's US operations, was quoted as saying.

Hanwha Defense said it shares Oshkosh's demonstrated passion for quality and responsiveness to the customer. The partnership
reflects Hanwha's elevated reputation abroad as a reliable producer of weapons, such as the AS21 Redback infantry fighting vehicle which has been shortlisted as a candidate for an Australian military project to replace old armored personnel carriers.

The AS21 Redback is competing with the Lynx developed by Rheinmetall Landsysteme of Germany. Three prototypes of the Redback are now undergoing tests and evaluations. Hanwha has developed the AS21 Redback to meet future warfare requirements with enhanced protection, firepower and performance. The 42-ton AS21 Redback can carry up to 11 people at a maximum speed of more than 65 kilometers (40 miles) per hour.

As a defense business arm of Hanwha Group, Hanwha Defense has exported combat vehicles. Hanwha's K-9 self-propelled howitzer has been shipped to Turkey, India, Poland, Norway, Finland and Estonia. In 2020, Hanwha Defense was picked as the sole preferred bidder for an Australian artillery gun procurement project to supply 30 K-9s and 15 K-10 armored vehicles for ammunition resupply.