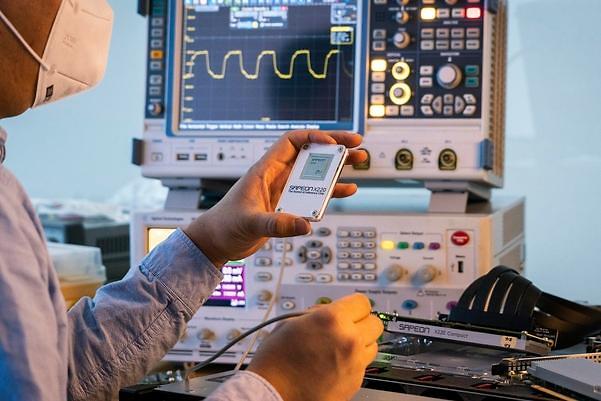 SEOUL -- Ahead of the official release of its artificial intelligence chip, SAPEON X220, SK Telecom, a key unit of South Korea's third-largest conglomerate SK Group, called for bigger investment in a semiconductor fab or known as a foundry, which operates for the purpose of fabricating the designs of other companies, such as fabless semiconductor companies.

A top player in the global foundry market is Taiwan Semiconductor Manufacturing Company (TSMC), which produces AI chips for SK Telecom (SKT). SAPEON chips that can enhance the performance of data centers through the speedy computation of massive amounts of data will hit the market by the end of June.

On the sidelines of an IT trade show in Seoul on April 21, SKT CEO Park Jung-ho hinted at injecting more money into semiconductor foundry to meet growing demands from domestic fabless companies. Fabless manufacturing is the design and sale of hardware devices and semiconductor chips while outsourcing their fabrication to a semiconductor foundry.

"Samsung (Electronics) also does foundry. I think we need to invest more in the foundry," Park told reporters. "There are a lot of requests from domestic fabless (companies) which think they can develop technologies or services if they are given foundry services at the level of TSMC," he said without giving any indications for manufacturing.

Samsung is locked in a battle of technical skills with TSMC through a massive investment to strengthen its competitiveness in System LSI and foundry businesses. Samsung's domestic rival, SK hynix has focused on the production of microchips. Market watchers question the financial strength of SK hynix following the acquisition of Intel's NAND memory and storage business for $9 billion in October 2020.

SKT has led a state project to develop next-generation AI chips and interfaces that can be utilized for high-performance servers like cloud data centers. The deep learning computation speed of SAPEON X220, unveiled in November 2020, is faster than that of graphics processing units (GPUs) widely used by AI-service companies. SKT aims to combine AI semiconductor chips and 5G edge cloud.