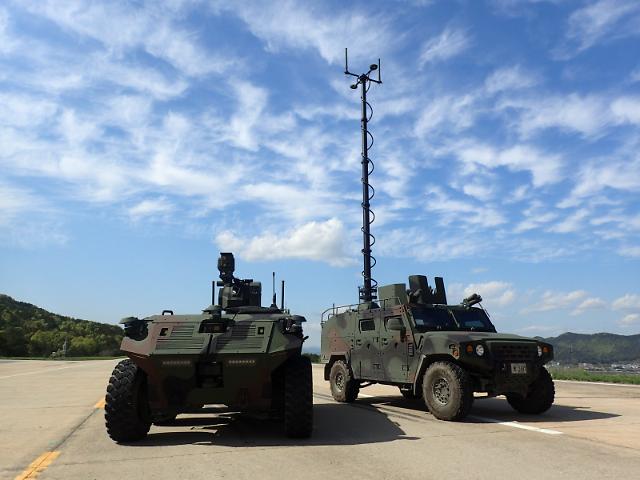 SEOUL -- An unmanned surveillance vehicle capable of carrying out reconnaissance missions or tracking a single target precisely on mountain roads will be deployed for South Korea's front-line cavalry units in 2027. A prototype operated by remote control or self-driving technology has passed a test for operational performance and suitability for military use.

The Defense Acquisition Program Administration (DAPA), a state arms procurement agency controlled by the defense ministry, said it has completed the exploratory development of a six-wheeled unmanned surveillance vehicle (USV). With the goal of mass production and deployment in 2027, DAPA would start developing a system in the second half of 2022. It would work with a separate command control vehicle.

The Agency for Defense Development (ADD), a state agency for research and development in defense technology, and defense companies such as Hanwha Defense, have been involved in the development of unmanned surveillance vehicles for mechanized infantry divisions and armored brigades.

DAPA said that the unmanned system is designed to secure quietness by applying a series hybrid method that charges batteries with an engine generator. "We hope the development of unmanned surveillance vehicles for armored units will minimize damage to troops and greatly improve the mission capabilities of armored units," Won Ho-joon, head of DAPA's unmanned business department, said in a statement.

Hanwha Defense, responsible for developing the vehicle and integrating communication and surveillance systems, said the USV features sophisticated unmanned functions such as follow-me, travel-route control, obstacle detection and avoidance, and path planning in the case of communication loss.

"This unmanned surveillance vehicle can be used to remotely lead mechanized units across a variety of terrains, including tactical roads, off-road, and unpaved roads," an unnamed Hanwha Defense spokesman said. "The vehicle is designed to conduct many different operations such as reconnaissance, target guidance, engagement
with the enemy."

The USV is to work either by remote control or autonomously. It is armed with a machine gun mounted on a remote-controlled weapon station, Hanwha Defense said. The platform can be reconfigured conveniently for other missions with the installation of different equipment like a detection device and drone for communications relay.

The vehicle can autonomously return or choose planned self-driving routes if communication is cut off, said Hanwha Defense, which has upgraded its multi-purpose unmanned ground vehicle (UGV) for overseas sales. DAPA has pushed for the introduction of various unmanned vehicles. Hyundai Rotem has been selected for the development of technologies that can remotely operate unmanned mobile combat systems such as tanks, armored vehicles and self-propelled guns.