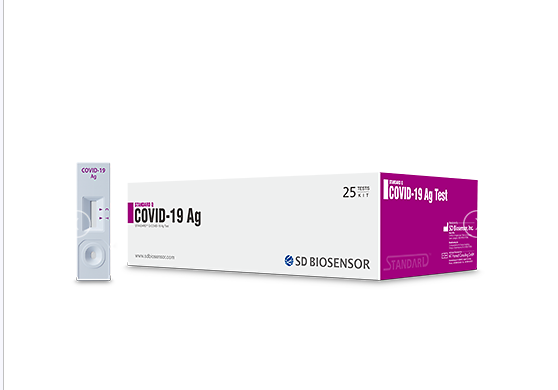 SEOUL -- Two homemade diagnostic kits for self-testing secured conditional government approval for domestic use, marking a major shift in the policy of South Korea's anti-epidemic control center which has maintained a conservative attitude in introducing convenient rapid test kits in its fight against COVID-19. The two devices have already been used abroad.

The Ministry of Food and Drug Safety said it has approved two antigen self-testing kits developed by in vitro diagnostic medical device manufacturers, SD Biosensor and Humasis. They will be available at drugstores or through the internet. The two products can be used temporarily and companies should submit additional clinical performance test data within three months.

The two products can be used by individuals taking samples directly from their noses without the help of experts. Test results can be checked within 15 to 20 minutes, the ministry said, adding they should be used as an auxiliary means of easy self-testings because they are less sensitive than the real-time polymerase chain reaction (PCR) method that amplifies specific DNA samples.

If quick testing produces positive results, health authorities should make a final decision through PCR testing. South Korean health officials trust nasopharyngeal swabs for the PCR method as the most reliable and accurate method. Rapid test kits had been approved only for urgent surgery.

The Humasis device was approved for professional use in March after it showed 89.4 percent clinical sensitivity. "If a PCR test is a microscopic observation with an accuracy of 100 percent, self-testing kits need to be used as a means of auxiliary inspection as there is a difference in accuracy comparable to that of a naked eye," said Finance Minister Hong Ham-ki, who serves as acting prime minister.

The adoption of diagnostic kits for self-testing followed a strong proposal from Seoul Mayor Oh Se-hoon, who was elected in a by-election in April as an opposition party candidate. Oh suggested that an inspection can be conducted before entering business sites to ease a financial pinch that has driven many restaurants, pubs and entertainment facilities into the corner.