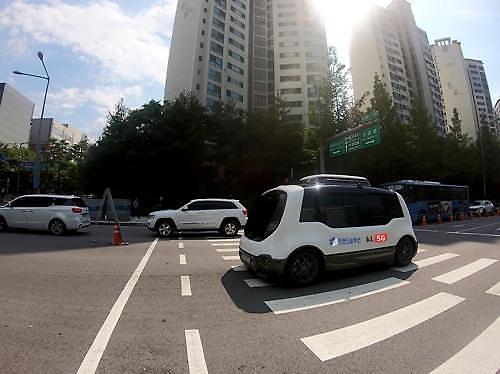 SEOUL -- Pangyo, a town district in a satellite city south of Seoul, was designated as a demonstration zone for autonomous vehicle technologies and related services. The district well known as the home of the country's iconic tech giants Naver and Nexon is now open for private companies to roll out test services for various mobility services such as self-driving shuttles.

South Korea has a nationwide 4G and 5G mobile communication network that is ideal for connected cars and mobility services. To accelerate the development of autonomous driving technology and mobility services such as car-sharing and self-driving taxi-hailing, the Ministry of Land, Infrastructure and Transport designated six cities including Seoul and the central city of Sejong as demonstration zones in 2020. Pangyo is the seventh zone.

The transport ministry said in a statement on April 26 that it has selected a seven-kilometer street in Pangyo to demonstrate autonomous vehicle technology and services. Private companies and startups can apply for regulation exemption before rolling out test services.

Pangyo already has a built-in road infrastructure for self-driving cars. It has a control tower and an internet of things (IoT) service network that enables road structures such as traffic lights to communicate with other structures and vehicles using vehicle-to-everything (V2X) communication technology.

Autonomous shuttle, premium taxi-hailing, and inter-linked last-mile mobility services that seamlessly connect public transports will be demonstrated. Shuttle buses will carry commuters, and unmanned taxis will offer luxury services. Demonstrations will begin as early as July 2021. Mobility services will be offered free or for a small fee.

"The experience gained at the autonomous vehicle technology demonstration zone would become an important footstone for companies that are preparing to commercialize their services," Vice Transport Minister Hwang Seong-kyu was quoted as saying. He said more demonstration zones will be set up across South Korea to accelerate the commercialization of services and have citizens familiarize themselves with new technologies.