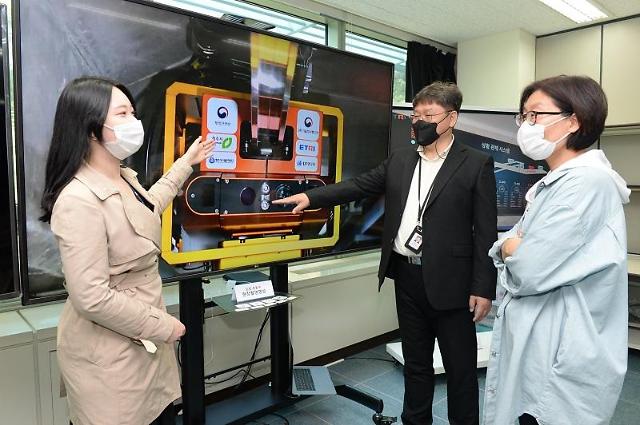 
SEOUL -- A state research institute has demonstrated an unmanned robot facility management system that is ideal for monitoring underground public utility facilities that consist of winding tunnels filled with cables and other structures. The robot system would help prevent disasters, and emergency workers can find their way around inside underground facilities.

The Electronics and Telecommunications Research Institute (ETRI) said in a statement on April 28 that its research team partnered with KI, a domestic information communication technology company, to demonstrate an AI-based management system inside an underground facility near Cheongju some 100 kilometers (62 miles) south of Seoul. The demonstration began in early April.

The robot uses various sensors such as thermal imaging cameras to monitor temperature, saturation levels of gases including oxygen and carbon monoxide, and moisture inside a maze-like structure. Data is relayed to its control tower in real-time. The robot can charge itself using wireless charging technology and move 10 kilometers on a single charge that takes about 30 minutes.

It took about two and a half hours for two maintenance workers to patrol inside the Cheongju underground facility. The robot can complete its job in just 30 minutes, ETRI said.

ETRI has also created a digital twin of the underground facility to prevent firefighters and workers from getting lost inside the vast structure. A digital twin is literally a digitalized version of the original and can be used to find the amount of damage a building would receive in case of an earthquake without damaging the original building.

The digital twin of the Cheongju facility will help firefighters study waypoints before they are deployed inside the underground structure in case of fire or other emergency situations.