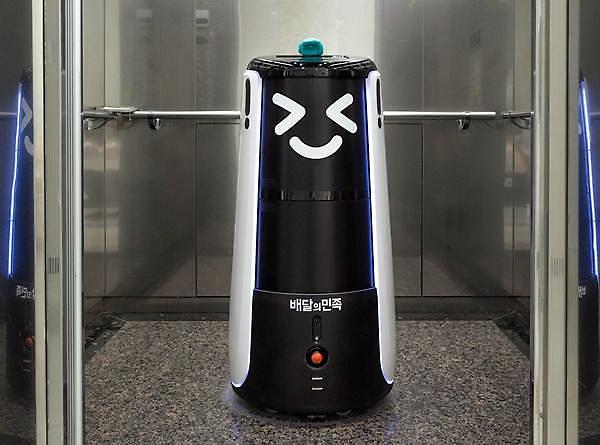 SEOUL -- South Korea's top economic official promised to ease robot-related regulations and allow delivery robots to travel between floors using elevators sometime this year. The move underlines government efforts to realize the early commercial use of self-driving robots at apartments and office buildings ahead of other countries.

The good news for the developers of intelligent service robots and self-driving algorithms like Woowa Brothers, the operator of South Korea's top food delivery service app Baedal Minjok, came at an economic meeting chaired by Economy and Finance Minister Hong Nam-ki on April 29. He stressed that regulations should not dampen growth in South Korea's robot industry.

"We will intensively support the commercialization of business models and provide support for quick demonstration by securing related budgets for the supply and diffusion of intelligent robots," Hong said, adding delivery robots would be allowed to board elevators this year, earlier than the original target of 2022.

Woowa is testing a self-driving robot capable of traveling between floors that will roam freely through an apartment complex for the delivery of food to the front door of each household. The robot can depart from a restaurant in the apartment's shopping mall, pass through the main entrance on the first floor, and take an elevator to arrive at its destination.

HDC I-Controls, a home network platform developer, provided a system allowing delivery robots to pass through the security system of apartment doors, while Hyundai Elevator developed a system that would allow an autonomous service robot to travel between floors.

Woowa has focused on the development of serving and food delivery robots that have been deployed in controlled environments such as an apartment block or an office district. However, the company is confident of commercializing delivery robots that can travel through crowded urban streets and react sensitively to the movements of automobiles, bicycles, children and pet dogs.

Hyundai Robotics has teamed up with Hyundai Engineering & Construction to develop service robots for the delivery of parcels in apartments and offices. They would upgrade simultaneous localization and mapping (SLAM) technology that allows robots to autonomously maneuver around obstacles. If SLAM is based on a three-dimension map, robots can navigate between floors using elevators.