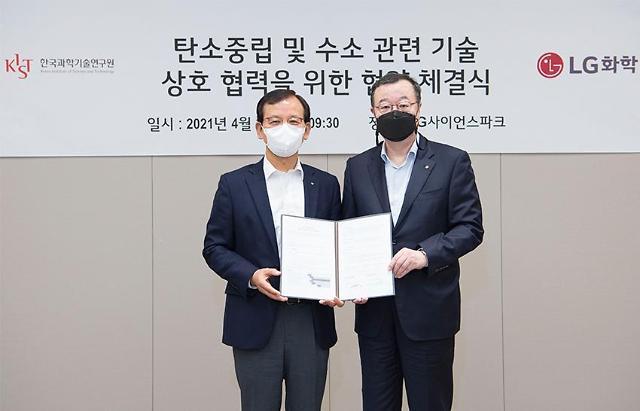 
SEOUL -- LG Chem, a chemical unit of South Korea's LG Group, joined hands with a state research body to develop source technologies and promote the commercialization of carbon capture and utilization as well as hydrogen energy technologies, which are essential for realizing carbon neutrality.

Carbon capture and utilization (CCU) is the process of capturing carbon dioxide (CO2) to be recycled for further usage. It may offer a response to the global challenge of significantly reducing greenhouse gas emissions. To achieve carbon neutrality, LG Chem and the Korea Institute of Science and Technology (KIST) would jointly develop technologies to produce green hydrogen and utilize thermoelectric energy.

CO2 can be captured directly from an industrial source by using a variety of technologies. LG Chem and KIST would cooperate in various fields such as artificial intelligence and digital transformation technologies for developing core materials and processes.

"Through a business agreement with KIST, which leads carbon-neutral innovation technologies in South Korea, we secured a bridgehead for the early acquisition and commercialization of source technologies for CCU and hydrogen energy that need long-term research and development," LG Chem's chief technology officer Yu Ji-yung said in a statement on April 28.

Highly functional biodegradable plastic that can be produced by converting carbon dioxide is environmentally friendly and has biodegradable properties. Carbon monoxide enables the production of synthetic gases, which are the raw materials of chemicals.

KIST head Yoon Seok-jin vowed to support the commercialization of source technologies. "It's time to get out of the lab and get through a national crisis, with excellent research results KIST has developed for carbon neutrality." South Korea's government roadmap calls for the reduction of annual greenhouse gas emissions to 536 million tons by 2030.

CCU does not aim nor result in permanent geological storage of CO2, while carbon capture and storage (CCS) aims to convert the captured CO2 into more valuable substances or products. SK Innovation and SK Energy have joined an EU-funded carbon capture project to explore opportunities for their entry into the overseas CCS market.