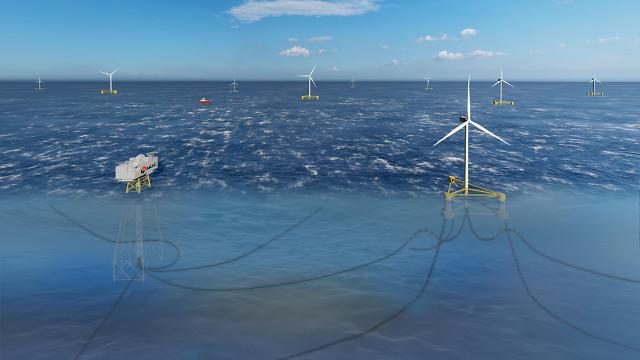 Korea National Oil Corp. (KNOC), which operates oil and gas fields, welcomed the green light from the Korea Development Institute (KDI) as a "significant starting point" for South Korea's energy transformation. "This is a significant starting point for great transformation from the era of carbon energy to clean energy," An Bum-hee, who heads KNOC's new growth project promotion team, said in a statement.

The project to build a floating wind farm off the southeastern port city of Ulsan dates back to October 2018, when KNOC installed a laser-based wind energy meter at its offshore gas platform, which is to retire in June 2021, to see if it could be converted into a wind power turbine.

Commercial floating wind turbines are at the early phase of development. An operational floating wind farm commissioned in October 2017 off the coast of Scotland has five turbines with a total capacity of 30 MW. Compared to fixed offshore wind farms which are generally installed in shallow waters, floating wind turbines located in deep waters can reduce visual pollution, provide better accommodation for fishing and shipping lanes, and reach stronger and more consistent winds.

Initially, KNOC did not attract much attention mainly due to opposition from environmental activists and fishermen as well as doubts about efficiency and the lack of related technologies. The state company took off its coat after the government of President Moon Jae-in pledged full support as part of a national campaign aimed at reducing the use of fossil and nuclear energy in a country that is entirely dependent on imported oil.

Fishermen have insisted that offshore wind farms would curtail their operating radius and damage marine habitats. They believe electromagnetic fields generated from high-voltage submarine cables could obstruct the spawning and migration of fish stocks. Ulsan actively launched public persuasion based on an environmental effects evaluation. Studies show that there is at present limited evidence that electromagnetic fields generated by offshore windmills affect marine habitats.

In response to concerns raised by some research bodies about technology subordination and high costs, the government promised to localize technologies related to floating offshore wind farms by 2025. In November 2020, an all-star team involving 15 domestic and foreign companies was formed to secure core technologies and develop a competitive model. Foreign companies included Van Oord of the Netherlands and Jan De Nul, a Luxembourg-based company.

SK Engineering and Construction teamed up with South Korea's leading steel group, POSCO, in April to develop a competitive floating structure that must provide enough buoyance to support the weight of turbines. Floating platforms introduce a new design paradigm to reduce the weight and cost of companion systems and overcome technical challenges so that they can be deployed in a wide range of site conditions.

South Korea has become an Asian hotbed of offshore wind farm construction since Orsted, a Danish power company involved in major offshore wind power projects in the world, unveiled a project in late 2020 to establish an offshore wind power complex with a potential capacity of up to 1.6GW near Kurop Island off the coast of Incheon, a port city west of Seoul.