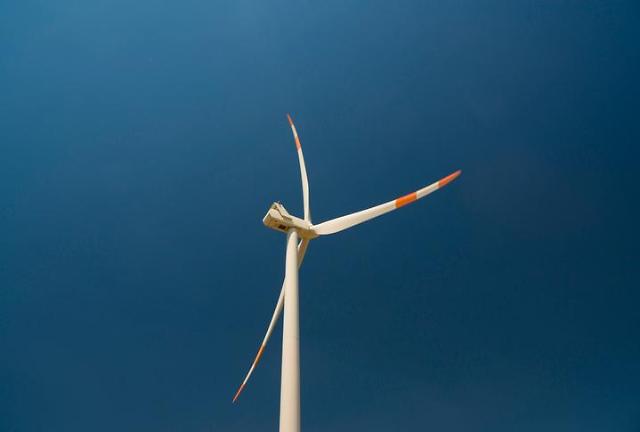 SEOUL -- South Korea's Hyundai shipbuilding group will lead a joint project to produce green hydrogen using electricity generated by a major floating wind farm complex that will be built off the southeastern port city of Ulsan with full government support.

The shipbuilding group said that its affiliates signed a memorandum of understanding with the Ulsan National Institute of Science and Technology (UNIST), Korea East-West Power, and other partners involved in the floating wind farm project led by Ulsan.

They will demonstrate a 100-megawatt pilot plant by 2025 and a 1.2-gigawatt plant by 2030. In a government-sponsored project, some 36 trillion won ($32 billion) will be spent by 2030 on building a huge offshore wind complex off Ulsan to produce 6GW of electricity that can be used by 5.76 million households.

The first-phase construction of turning an offshore gas platform into wind farm facilities by 2025 with an injection of more than 1.4 trillion won has passed a preliminary feasibility study conducted by the Korea Development Institute (KDI), a national think tank, heralding the beginning of South Korea's first floating wind farm project.

In a ceremony on May 6 in Ulsan, President Moon Jae-in described floating wind farms as South Korea's future growth engine and a "shortcut" to achieve energy conversion and carbon neutrality as it can reduce 9.3 million tons of carbon dioxide annually. "Ulsan will become the world's best hydrogen city in 2030 and lead South Korea's carbon neutrality."

"The floating offshore wind farm in Ulsan will become an oil field on the sea and open the future of an energy powerhouse," Moon said, adding that South Korea can produce 84,000 tons of green hydrogen by utilizing 20 percent of electricity produced by the wind farm complex in Ulsan in 2030.

In March, the shipbuilding group unveiled a new business roadmap to establish a hydrogen value chain by 2030 by combining the infrastructure and technology competitiveness of affiliates. The group will accelerate the development of hydrogen transport ships and create vessels with hydrogen fuel propulsion.

Hyundai Oilbank, a refinery arm of the shipbuilding group, will produce blue hydrogen and use it for desulfurization facilities or sell it as fuel for vehicles and power generation. Under a deal on March 3 with Saudi Aramco, the refiner agreed to use Aramco's ammonia as a fuel for liquefied natural gas boilers. Ammonia is seen as a more suitable ship fuel for the post-carbon era due to its stability in supply and relatively easy storage and transportation.

Ammonia, which is a combination of nitrogen and hydrogen, was highlighted as the top resource to establish a fuel cell-based infrastructure. A UNIST team led by Kim Gun-tae, a professor of energy and chemical engineering, has developed a method to produce green hydrogen by decomposing liquid ammonia into electricity using porous nickel foam electrodes. The surface of nickel foam electrodes has platinum catalyst particles evenly applied for high efficiency.

Kim said the method consumes less electricity than hydrogen by electrolysis. "If high-efficiency electrodes presented in this study are applied to ammonia electrolytic processes, the commercialization of hydrogen production technology will be faster."